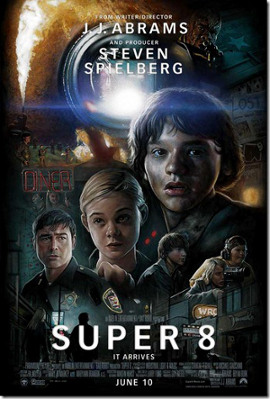 Just saw JJ Abrahms monster mash "SUPER 8" I am not going to sit here and give you spoilers or story details about this film, just my opinions of it.

You probably know the premise but I’ll tell it anyway for some of the people who live under a rock.

A group of friends making a Super 8 zombie movie, in the summer of 1979, witness a massive train crash, and then find out the crash might have not been an accident at all. After strange and unexplained things start happening the kids begin to investigate what is going on their town.

It’s a coming of age movie, a monster movie, an adventure, and a comedy, not in a slapstick comedy, but kids are kids., and works it’s best when they are just hanging out.

The first 15 minutes of the kids making their little movie is funny and sweet, it reminded me of when my friends and me used to make super 8 movies in the seventies. Well as they are shooting a scene, an epic train crash happens, literally, right in front of them. I must admit that the crash is pretty amazing piece of filmmaking, even if it is CGI. The train is one of those long cross-country trains, so cars and parts are flying around everywhere. You can actually feel the kids in peril as they run for their lives, when the everything hits the fan.

The casting of the friends is spot on, the kids get to act like kids, which is good. As a matter of fact everyone in this film is perfect.

The directing is great, the cinematography is great, the sound design, the wardrobe, the look and feel of the period is perfect, it feels like 1979. Even those lens flares made me nostalgic for that era.

A lot of people are comparing this to Goonies, but that is just a generalization. Any movie where a bunch of kids are doing anything adventurous will be compared to that.

But this is a monster movie, it is the central catalyst for what happens, and JJ Abrams keeps the suspense going throughout. A shadow here and reflection there, you never get to see the creature as a whole until about 90 minutes in.

But there is a problem, while the film was enjoyable, the last 10 or so minutes killed it for me. They try to make you feel sympathy for the monster and this may have worked, if the monster did not eat innocent people, hung up in it’s lair like sausage. If this monster is much more intelligent than humans and telepathic, means it would also have known the difference between good guys and bad guys. Now people who have seen this movie may argue with me on this. But lets be honest do good/bad people taste differently, I don’t think so. I am surprised that Spielberg let this issue slip through, I guess he was happy that Abrams was pretty much making an homage to him.

And when it comes down to it, the monster looked like something out of a “Gears of War” video game.

Also one small nit-pick Ideal Toy Company began exporting the Rubik’s cube, in 1980 from a Hungarian manufacturer so don’t have someone in 1979 say “Hey, that looks like a Rubik’s Cube”. Also I don’t think that Hunchback of Notre Dame model box is a period one at that.

What began as an awesome movie, and continued to do so throughout, just lost everyone at the last minute. So as a how friend Tim just mentioned, I feel the same way, I didn't hate it but I didn't love either.

To watch the actual zombie movie “The Case” the kids were making during the credits almost rectified it. But while that little film was awesome, it was just to late. (The kids actors in the film wrote and directed the film within a film on their own)

All the critics out there love this film, even the LA Weekly and the NY Post loved it. But I think they were mostly in love with the nostalgia the film invokes.

Search the Web for More information on Super 8 Movie Review at LookSeek.com Search