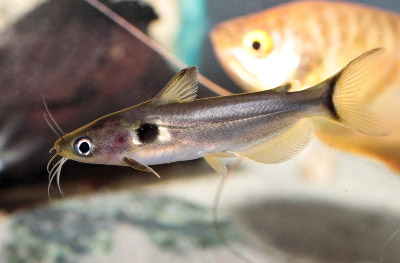 The sun catfish has a large head with large eyes and a wide mouth. It has a yellowish body and a prominent black shoulder spot that easily helps identify the fish. The fish is about 45cm in length. The sun catfish also has a hard spine, a dorsal fin and an adipose fin. It has four pairs of barbells, two mandibles, one maxillary and one nasal.

If you thought you knew a creature with many names; think again. The sun catfish originates from India and it has a number of names. Some of these include: spotted Thai catfish, solar catfish, Gunther’s catfish, bull’s-eye catfish, eclipse catfish as well as golden red tail catfish. They are also known as Horabagrus brachysoma. Whatever name you give the catfish they all smell the same.

The sun catfish get to the market at less than two inches. They are nocturnal and not easy to see. If you want them to appear from their hideout you can use cichlid pellets. In fact the sun catfish are only comfortable in their hiding nooks and crannies.

The sun catfish eat all sorts of foods that are edible. They grab little cichlid pellets, flake foods, and any other small fish that can fit in their mouths. The sun catfish loves live worms, ghost shrimp and live brine shrimp.

This species is an important source of food to the Indians; it is also sold for aquarium purposes. The sun catfish is an endangered species and for the past few years it has reduced in population due to some the following factors:

This species is compatible with any other non-aggressive large fish. If you have small fish that can fit in the mouths of the sun catfish be sure that these will not survive in the same tank as the sun catfish.

The sun catfish also requires a large tank because of its large size. Being nocturnal; the fish favors dark conditions.