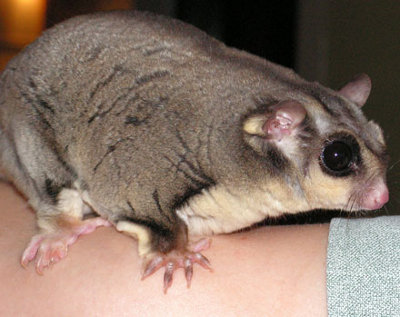 Facts about Sugar Gliders. "Scientific name for Sugar Glider is Petaurus breviceps". For most people who are not aware about the existence of Sugar Gliders, well, it is the most amazing type of species that can be able to float on air. The Sugar Glider are small and have been known to be tree dwelling marsupial. You may be wondering why they have been given the name” Sugar Gliders” Well, most of these species, for a very long time have been noticed to be fond of sweet foods in addition to their gliding habits. Most of the Sugar Glider are very small in size and love to be carried around in pouches.

A Sugar Glider weighs approximately 5 ounces (140 grams). They have huge eye and ears and are covered with grey fur. The Sugar Glider also have a bushy long tail that may grow approximately 7 1/2 inches (19 cm) long. Most of the Sugar Gliders bodies may grow to about 6 3/4 inches (17 cm) long. They are known to be covered with a membrane between their ankles and wrist. This membrane is known as the patagium. When the Sugar Gliders spreads out their feet and hands, their patagium takes the form of a parachute which enables them to float in air and hover around.

In addition, the Sugar Glider also have huge toes in their hind legs which help them in climbing trees and gliding through strong grips on trees. The Sugar Glider is known by most people for its social behavior. It is considered to be an active species that loves to glide, jump and hover around. However, they usually have a short life span of twelve to fifteen years. Most of the Sugar Glider species are found in the inlands eucalyptus and coastal lowland rainforests of countries like Indonesia, Tasmania, New Guinea and north east of Australia.

The Sugar Gliders spend most of their days in tree hollows and leafy nests. During the night, they feed on insects from eucalyptus trees, sap and nectar. They may glide for as far as fifty meters in order to seek for their food.

Search the Web for More information on Sugar Glider at LookSeek.com Search