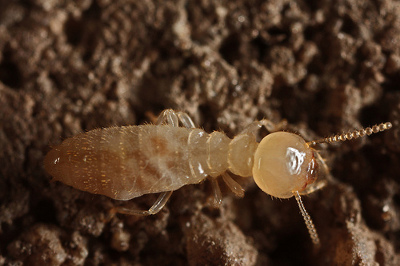 Like other social insects such as bees, the Subterranean Termites share their resources and divide labor in relation to a caste system. The Subterranean Termites then live in large numbers known as a colony that consists of males and females generally organized into the solder caste, the worker caste and the reproductive caste.

The difference between these three groups of Subterranean Termites is very evident. In terms of their sizes, workers are the smallest. The Subterranean Termite are creamy white to grayish-white, wingless, blind and soft-bodied with a round head. They are about 3mm long. The number of the worker caste happens to be the highest also. Their number could be as high as five million. The reason they must be many is because the Subterranean Termite are responsible for foraging for food, water, construct and also repair the shelter tubes, care for young and the eggs, feed and groom other termites as well as participate in the defense of the colony.

The Subterranean Termites do not have a permanent nest. They are mobile throughout their lifetime. Nevertheless, their movement is determined by moisture, food and temperature.

Their feeding is characterized by feeding on anything cellulose. Unfortunately, the Subterranean Termite can tunnel through most materials in order to gain access to the cellulose covered under these materials, a behavior that is highly destructive to human activities. In a matter of fact, Subterranean Termites is responsible for over 80% of the $2 billion spent in the United States per year on termite control. Since termites feed on wood cellulose, it is sometimes very difficult to identify an infested structure as they will chew their way into the wood such that from outside, the wood appears sound but the inside has a honeycomb appearance.

Search the Web for More information on Subterranean Termite at LookSeek.com Search