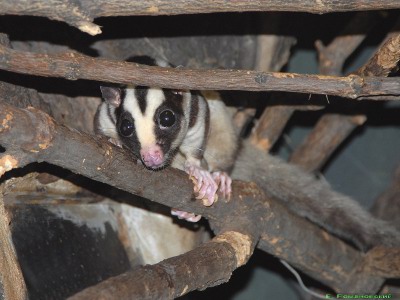 Facts about Striped Possum. "Scientific name for Striped Possum is Dactylopsila trivirgata". Believe it or not, the striped possum is visually noteworthy. Most people have noticed the Striped Possum beautiful popular striping patterns with its entire body being black with only three strips of white colors running all the way from the species tail to head. What may go unnoticed is how the white strips form a y-shaped pattern on its head.

Most of the stripped possum usually give off an unpleasant, musk-like, aggressive body odor, which its specific purpose hasn't yet been known. In addition the Striped Possum is closely related to the Sugar Glider including its appearance. The species is known to be a member of the Petauridae family which comes from one of the known marsupial families.

The stripped possum is approximately ten inches long (25.4 cm) and may have an average weight of about fifteen ounces (425 grams). However, many of the Striped Possum have been reported to weigh between ten to twenty ounces (283 to 566 grams) or even more. Most of these Striped Possum are known to be purely solitary and nocturnal in addition to the way they build their nests on trees. The question you may ask your self is, “How do these stripped possums live?” Well, it is simple.

The stripped possum has a prehensile tail in addition to an elongated fourth finger relative to the rest of its fingers. This helps the Striped Possum to well adapt to their environment where they live and feed on crickets’ termites and bug larvae from beetles and moths. In addition, they also feed on fruits, foliage, flowers and nectar. The Striped Possum are usually known to scour big tree branches, decaying logs and trunks for food.

Most of the stripped possums inhibit the damp environments of the tropical rain forest in Papua New Guinea, Indonesia and Australia. However, some live in woodland environments that consist of the eucalyptus and the melaleuca trees such as along the east coast of Cape York Peninsula.


According to the IUCN Red List of Threatened Species of 2008, the stripped possum is mentioned as one of the animals considered world-wide to be of “least concern.” However, clearing of trees in some places like the New Guinea, has led to the destruction of the habitats of the stripped possums consequently endangering this otherwise precious species.

Search the Web for More information on Striped Possum at LookSeek.com Search