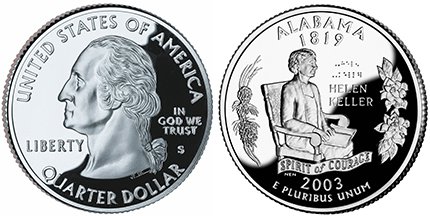 As the consequence of a design competition launched by Don Siegelman, the Governor of Alabama, more than 450 drawings and design proposals were received from the schoolchildren of the Alabama State. The guidelines of the competition have permitted the submission of three designs for each grade for each school in Alabama. Schools were permitted to choose designs from groups, individuals, or school-sponsored contests. Siegelman, the Governor asked contestants to follow the subject, "Education: Link to the Past, Gateway to the Future." The concept behind the competition was to offer students the chance to use their creativity and to cheer research into the rich history of Alabama.

The designs that were submitted include space shuttles and moon rockets, representing the contribution of Alabama to the United States space program. A figurine of Vulcan, representing the heritage of iron manufacture of Alabama, Native American Cherokee Indian Chief Sequoyah, representations of the stunning Alabama State Capitol, and a variety of state emblems.

The Governor of the state and his personnel had a hard time in choosing ideas to present to the United States Mint, but lastly determined on a handful that incorporated the State Capitol, the Yellowhammer, the state bird of Alabama, Helen Keller, and a design by Amy Peterson of Birmingham school, depicting a variety of symbols of the history of Alabama, as well as Sequoyah, the Cherokee Indian Chief, on a chronological time line.

All were decided that the historical timeline, presented by the Birmingham school freshman, was the most stunning of the group. Mint carvers agreed, as well, but decided that the design was excessively detailed to be displayed on the miniature face of a quarter. Mike Kanarick, the press secretary of the governor praised the Amy's quarter, but he also felt it was excessively detailed to replace on the face of a quarter. During the early 2002, the United States Mint lessened the designs down to six possible designs, some of which include elements recommended by Peterson.

By the time July, 2002, Helen Keller was chosen to symbolize Alabama on its commemoration state quarter. Don Siegelman, the Governor of the state remarked that Helen Keller represents the bravery of a people who have been through the civil rights and civil war. She is a noticeable prompt of the significance of education and willpower, and the significance of having a good educator.

The Governor of the Alabama State made the design public, for the state quarter of Alabama, at Epic School in an auditorium, crammed with the students of elementary school. The expression "Spirit of Courage" stands for the power, determination and optimistic attitude of the people of Alabama, who from their initial habitation have revealed the remarkable courage. “Embodying such bravery in the face of irresistible challenges was Helen Keller, whose existence and strength, continue to motivate generations all over the world.

The United States Mint brought in the novel Alabama quarter, at Ivy Green, the place of birth of Helen Keller. Bob Riley, the Governor, Howell Heflin, the earlier U.S. Senator and Heather Whitestone-McCallum, the former Miss America has joined Henrietta Holsman-Fore, the U.S. Mint Director for the celebrations.

Each year at "Ivy Green" in the Tuscumbia City, a festivity is held for a week to celebrate the lifetime achievements of Helen Keller and her "Spirit of Courage."

Search the Web for More information on State Quarter of Alabama at LookSeek.com Search