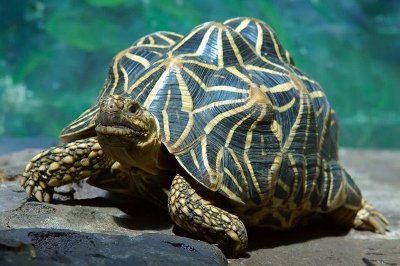 The Star Tortoise breed is vulnerable to breathing problems, which happen when a tortoise experiences the cold climate in the wild or it is maintained in suboptimal conditions in the captive. Symptoms of their breathing problem comprise a nasal discharge, labored breathing, a gaping mouth, lethargy, puffy eyes and a loss of hunger.

In the wild, the Star Tortoise grazes and feeds on a range of plants and grasses. In the captive, they are fed with high-fiber foods rich in calcium. The Star Tortoise also fed with greens, grasses, fruits, vegetables, and commercial or prepackaged foods.

The Star Tortoise is not a good pet for young kids, and they are supposed to be handled rarely. These tortoises are shy that they will withdraw their limbs and head. However, they will usually be trained to identify their keeper and will come for the food. The Star Tortoise is not territorial, too, such that multiple female and male tortoises can be maintained together devoid of the fighting, violent biting and colliding with each other during breeding.

The average lifespan of the Star Tortoise ranges from 30 years to 80 years in the wild, and in the captive, their lifespan is more than 80 years.

Search the Web for More information on Star Tortoise at LookSeek.com Search