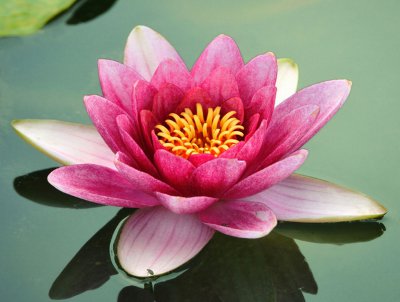 The spring lotus is a flowering plant belonging to the family Nymphaeaceae. Scientifically, it is classified under the genus Nymphaea. Research has found out that the plant grows in areas such as Southeast Asia and East Africa. There is a variant of this species that is found along the thermal waters of Peta River in Romania.


Physical Description
The Nymphaea lotus as it is known in scientific circles has lily pads that can be seen floating on water surfaces. Its blossoms also rise above the water surface. It grows up to 45 cm in height and it is grouped as a perennial plant. The color of its flowers is usually white but in some instances, it is tinged with a shade of pink.

Growth and Applications
You can easily find the spring lotus in warm and clear waters which are slightly acidic. It grows in harmony with other plants such as Utricularia stellaris.

In the many places where it is grown, the spring lotus is often used as an aquarium plant. Its flowers are usually beautiful and some people grow the plant just to admire the flowers. On the other hand, some aquarists may trim the lily pads and remain with only the underwater foliage.

In ancient Egypt, the spring lotus locally known as the Egyptian lotus was worshipped because it was considered to be a representative and symbol of creation. In Greece, the same plant was used as a symbol of modesty and innocence.

In some parts of Africa, the rhizomes of the spring lotus are used as food because of their rich starch content. They can be roasted, boiled or ground in some circumstances to make flour which is then dried. The young fruits from the spring lotus are used in making of salads.The Nymphaea lotus also contains nupharin which is a quinolizidine alkaloid and other related chemicals. According to research, these chemicals have some effects similar to those of psychedelic aphrodisiac.

Search the Web for More information on Spring Lotus at LookSeek.com Search