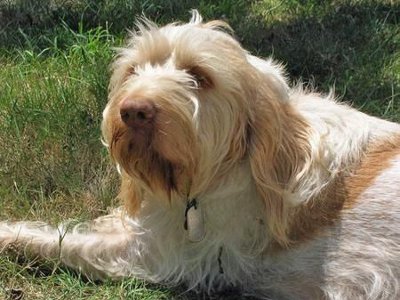 Spinone Italiano Dog is a large muscular dog with floppy ears and a squarely built body. The Spinone Italiano Dog also has a long head and a roman-nosed muzzle. On the other hand, this breed of dog has very bushy eyebrows, beard and mustache whose purpose is to offer face’s protection against brushing while in the hunting field. Also, the Spinone Italiano Dogs breed sweet demeanor and soft looking eyes. The coat’s size ranges between 1 1/2 and 2 1/2 inches (3.8 to 6.3 cm) although it is short on the ears, feet, legs and muzzle. The coat’s color could be white, white with orange patches or entirely orange.

Spinone Italiano dogs have to be brushed weekly in order to remove the loose hair. To maintain proper hair texture, the Spinone Italiano Dog has to be trimmed several times a year. In order to keep the dog clean and tangle-free, the eyes as well as the beards have to be wiped down on a daily basis.

Spinone Italiano Dogs have two times the amount of ear muscles than people. It is a fact a Spinone Italiano Dog can hear a sound at four times the distance of a human. Sound frequency is measured in Hertz (Hz) Def-Hertz is the measurement of frequency, explicitly it's one cycle per second. The higher the Hertz are, the higher the pitched the sound is. Dogs hear best at 45,000 Hz to 65,000 Hz, while humans hear best at around 20 Hz to 20,000 Hz.

Spinon Italiano also has to undergo vigorous exercises like walking for thirty minutes on a daily basis for health benefits.
If purchasing a Spinone Italiano Dog from a breeder, make sure to find a good breeder with references check at least two to three of the puppies that were purchased from this breeder.
The Spinone Italiano Dog Sporting Group in 2000 it was recognized by the (AKC) American Kennel Club.

Search the Web for More information on Spinone Italiano Dog at LookSeek.com Search