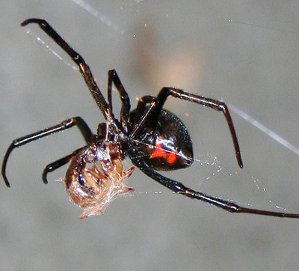 Spiders have oversize brains.
In the spider the oxygen is bound to "hemocyanin" a copper-based protein that turns their blood blue, a molecule that contains copper rather than iron. Iron-based hemoglobin in red blood cells turns the blood red

Spiders have two body parts, the front part of the body is called the Cephalothorax-(the thorax and fused head of spiders). Also on this part of the body is the spider’s gland that makes the poison and the stomach, fangs, mouth, legs, eyes and brain. Spiders also have these tiny little leg-type things called (pedipalps) that are next to the fangs. They are used to hold food while the spider bites it. The next part of the spiders body is the abdomen and the abdomens back end is where there is the spinnerets and where the silk producing glands are located.

The muscles in a spiders legs pull them inward, but the spider can't extend its legs outward. It will pump a watery liquid into its legs that pushes them out. A Spider’s legs and body are covered with lots of hair and these hairs are water-repellent, which trap a thin layer of air around the body so the spiders body doesn't get wet. It allows them to float, this is how some spiders can survive under water for hours. A spider feels its prey with chemo sensitive hairs on its legs and than feels if the prey is edible. The leg hair picks up smells and vibrations from the air. There are at minimum, two small claws that are at the end of the legs. Each spiders leg has six joints, giving the spider 48 leg joints. The spider’s body has oil on it, so the spider doesn't stick to it’s own web.

A Spiders stomach can only take liquids, so a spider needs to liquefy their food before they eat. They bite on their prey and empty its stomach liquids into the pray which turns it into a soup for them to drink.

A male spider has two appendages called "pedipalps" a sensory organ, instead of a penis, which is filled with sperm and insert by the male into the female spider’s reproductive opening.

Spiders do not have a skeletons. They have a hard outer shell called an exoskeleton-(a rigid external covering for the body in some invertebrate animals). The exoskeleton is hard, so it can’t grow with the spider. The young spiders need to shed their exoskeleton. The spider has to climb out of the old shell through the cephalothorax. Once out, they must spread themselves out before the new exoskeleton will harden. Now they have some room to grow. They stop growing once they fill this shell. Female spiders are usually bigger than males.
Female spiders lay eggs on a bed of silk, which she creates right after mating. Once the female spider lays her eggs, she will than cover them with more silk.
Spiders and Webs Insects, spiders and scorpions appeared on land 400 million years ago. The first insects were wingless and could easily be caught by the spiders and scorpion. Then insects developed the ability to fly and for about 100 million years, until the arrival of birds, they ruled the sky. Soon they were not safe in the air. Spider developed the art of building webs that were deadly traps for unwary insects.

Spiders like to preserving their prey alive in silky cocoons they like live food, some Spiders with hair on them are mammals, Spiders are sometimes thought of as insects. But in fact they are arachnids. All insects have six legs, whereas all spider and scorpions have eight legs. Spiders do not have antennae and their bodies are divided into two parts. Spiders that construct webs do so by using structures called spinnerets. Inside a spinneret, silk glands produce a liquid, which is then forced out through a tiny hole. When it meets the air is hardens to form the silk. The webs of some spiders, such as garden spiders, are sticky, and insects that fly into the web are held there until the spider can reach them. On the other hand, the web of a house spider is not sticky. The spider waits for an insect to land on it web and then rushes out and seizes it.

Not all spiders make webs, and but the silk is used for a number of other things. The trap door spider digs a burrow, then lines it with silk, and covers it with a silken lid with pieces of leaves woven in the camouflage. When an insect comes near it the spider rushes out and grabs it.
A jumping spider uses a silk thread as an anchor line, in case it misses its target while jumping. Some spiders use long silk lines as parachutes and may be blown long distances by the wind. Silk is also used for wrapping prey and enclosing eggs in the cocoon.

Some spiders trap their prey without the use of silk Jumping spiders leap on their victims several inches away. Crab spiders lie in wait and disguise themselves into their surroundings, such as a bird dropping or the center of a flower. Wolf spiders catch their prey by simply chasing after it.

Spiders feed mostly on insects but larger ones sometimes catch birds or small mammals. After the victim has been caught, the spider first paralyzes or kills it by injecting venom through to hollow fangs. Spiders use the same technique to defend themselves. Most are harmless but some, such as the Black Widow Spider in the United States are extremely poisonous. When the prey has been immobilized, the spider injects it with digestive juices. Spiders cannot take in solid food and therefore feed on the partly digested contents of their victims bodies. Mating can be an unpleasant event for a male spider. The female is often much larger and may attack anything that moves, The male spider approach cautiously and take care to identify themselves. Some males present a female with a dead fly, and then mate while she is eating it. Some of the females eat the male anyway after mating.

Search the Web for More information on Spiders and Webs at LookSeek.com Search