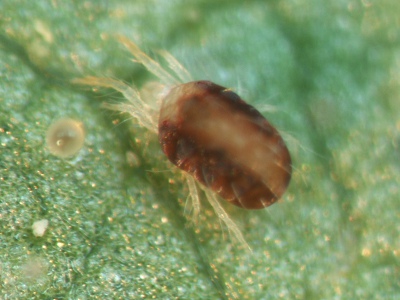 Facts about Spider Mites, "Scientific name for Spider Mites is Tetranynchus". Spider mites are small sucking insects which are very hard to control. They are normally invisible until a person realizes that the plant has been eaten up. In fact the Spider Mites attack the plant and suck the vigor which kills the plant. They belong to the family of Tetrancychidae and are members of Acari.

The Spider Mites are among the 1200 species found around the world. Their main habitats are under leaves of plants where they spin silk webs and damage plant cells so that they can feed. The Spider Mites feed on so many species of plants which are believed to be more than a hundred plants. An example of some of these plants is; tomatoes, pepper, potatoes, strawberries, beans, corn etc.

The Spider Mites vary in color and are less than 1 millimeter in size. This makes it difficult for a person to see them in their naked eyes. The eggs laid are spherical, small and transparent. The silk webs that the Spider Mites spin are to help them protect their colony from predators. The Spider Mites get their name spider from this webbing.

Spider mites multiply during hot and dry conditions. The condition where there is 80 fah (27 degrees Celsius) allows them to hatch within three days and become sexually active within five days. Female Spider Mites lay up to 20 eggs in a day and this explains why they still multiply in numbers instead of diminishing when they are controlled by use of pesticides. They are resistant to them especially when they are used repeatedly for a long time. The Spider Mites live span is about 2 to 4 weeks.

Spider mites are arrhenotochous, where female are diploid and males haploid. When female Spider Mites are mated they avoid the fecundation of some eggs to produce males. The unmated and unfertilized females will still lay eggs that hatch haploid males.

Search the Web for More information on Spider Mites at LookSeek.com Search