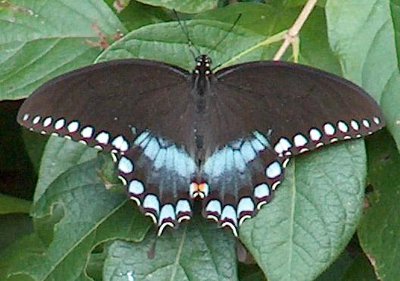 Their caterpillars mimic small snakes to deter predators, down to having large white “false reflections” of eyespots. The underside of the Spicebrush swallowtail larva is pinkish brown. They have a band of blue dots on their abdomens, though this is thicker than the dots on the related species Papilio palamedes. The caterpillars have green or brown anterior horns. The caterpillas that hatch bend the leave over before creating silk to connect it to the next leaf down. This creates a nest in which the larva can stay, somewhat protected and hidden from predators.

Spicebush Swallowtail chrysalis (pupa) tend to resemble the stems on which they are attached, either green or brown. The pupae that are developing over the winter are always brown. Some of each generation develop over the winter to emerge in spring, while others pupate over the summer to emerge in the fall. The Spicebush Swallowtail caterpillars sometimes change color from green to yellow before pupating. They are capable of producing two generations a year, from April to October and October to April. In the warmer parts of the U.S.,
Spicebush Swallowtail butterfly larva resembles small snakes. They have large eyespots to further that deception. They stay hidden during the day and come out to feed around sunset and continue feeding through the night.

Spicebush Swallowtail butterflies are found in wooded areas and swamps. Males patrol the edges of the woodlands to find receptive females. The Spicebush Swallowtail Butterfly range is from the U.S. Northeast down to Florida except around the Florida Keys, inland to several hundred miles west of the Mississippi river. However, they are less common west of the Mississippi river.

Search the Web for More information on Spicebush Swallowtail Butterfly at LookSeek.com Search