Back To Category Owl
Title : 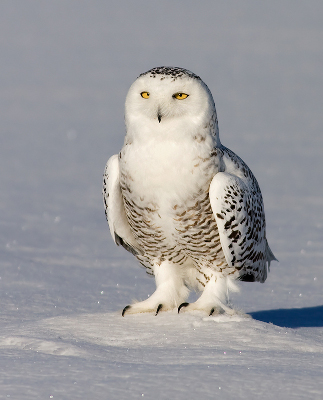 Facts about Snowy Owl. "Scientific name for Snowy Owl is Nyctea scandiaca". Snowy Owl is a Bubo type of bird that comes from the Strigidae family. Earlier, the bird was considered one of the members of a distinct genus, but later it was included in the horned owls genus Bubo. It is the official bird of the Canadian state Quebec. It is also an extensively sought after bird by nature-enthusiasts and birdwatchers alike. The Snowy Owl can be seen depicted in European cave paintings. In some years, Snowy Owls of North America stay on their breeding grounds all through the year, whereas other owls migrate to the southern parts of Canada and the northern part of the neighboring United States during the winter season. In New England and New York, Snowy Owls can be seen regularly during winter.

Usually, when the Snowy Owl is young, it has a dark brown color body and as it becomes old, it will attain a white color body. They have a stout body, with thick feathering on their legs that makes them appear broad at the base while sitting on the earth. Female owls keep a few dark markings all through their lives. Even though the darkest male owls and the palest female ones are nearly similar in color, the white color owls are always the male birds and the most deeply barred owls are always the female ones. They have a smoothly rounded head without ear tufts.

The juvenile Snowy Owl young may scatter remarkably a great distance from their origin. The Snowy Owl has thick feathers that protect the bird against the Arctic cold make these birds the heaviest owls of North America.

The Snowy Owl is an irruptive average-migrant to long-distance migrant bird. Their migrations are extremely uneven. The Snowy Owl of North America used to migrate to the southeastern parts of Canada, New England and the upper Great Lakes states during winter every year. The winter population of Snowy Owls in the United States used to peak occasionally, which may be due to lemming cycles beyond north. At the time of irruptive periods, the Snowy Owl can flush south all through the lower 48 states of the United States, as far as the southern parts of Florida and Texas in extreme winters.

Mostly, the Snowy Owl feeds on small creatures, generally lemmings. Sometimes, these birds also feed on waterfowl and ptarmigan. These owls are one among the most nimble birds that are capable of catching small birds during the flight. On both their wintering and breeding grounds, they used to feed on rodents, hares, rabbits, weasels, squirrels, wading birds, ducks, seabirds, geese and grebes.

The Snowy Owl is territorial on its breeding regions, and occasionally, its wintering areas, too. Some owls of this variety protect their winter territories violently, even involving in fights with other owls of their variety. Some Snowy Owls go back to the similar wintering location every year. Not like most owls, the Snowy Owl is diurnal. They will always hunt during the incessant daytime of an Arctic summer. In addition, they may consume in excess of 1,600 lemmings in one year.

The average life span of the Snowy Owl is 9 1/2 years.

Search the Web for More information on Snowy Owl at LookSeek.com Search