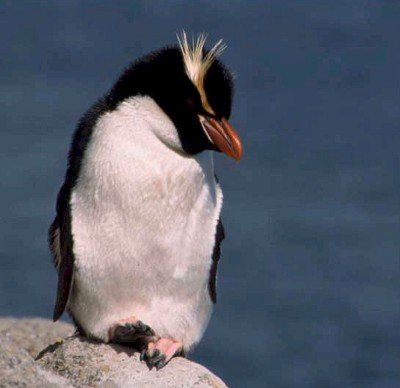 Facts about Snares Penguins. "Scientific name for Snares Penguin is Eudyptes robustus". The Snares Penguin is small-medium in size and one of the most visible among all. Snares penguin are found in Snares Islands in the Southern Coast of New Zealand and this explains why they have that name.

Features of the Snares Penguin

This family of penguins has snow white under parts. The upper part, head and throat are black in color. One of the most noticeable features when you see the Snares Penguin is the bright yellow, thin, bush crest which runs above and behind the eyes. The male Snares Penguin has brown bill and pink skin at its base.
The Snares Penguin have a large beak which is reddish brown in color and just at the base it has a white skin. The Snares Penguin are very vocal and they swim at a speed of 15 MPH (24 km/ph). The Snares Penguin weigh 6 to 7 lb (2.5 to 3 kg) and are between 25 inches (64 cm) up to tall. "Scientific name for Penguin Sphenisciformes". Snare Penguins are also known as Snares Crested Penguin and Snares Island Penguins. There life span is about 15 to 20 years in the wild.

The 17 penguin species are protected from egg collecting and hunting. The Snares Islands is a marine sanctuary and landing on the island is not allowed, access is only granted by a special research permit. The Antarctic Treaty of 1959 makes it illegal to interfere with, a penguins or its eggs or harm in any way. Every permit issued on collecting penguin specimen must be reported to the Scientific Committee for Antarctic Research (SCAR) and approved.

Reproduction of the Snares Penguin

The Snares Penguin breeding period is between September and January which they pair up. They breed at the age of six to seven years. The male Snares Penguin gets to the nests first whereas the female one follows after one week. They normally scrap holes where they make nests with grasses and leaves. The Snares Penguin shelter their nests very well to make sure that their eggs are safe.
Pairs of Snares penguins are believed to find each other annually and to mate again and again each year. Just as other penguins they lay two eggs but rarely dose the first one hatch. Both Snares Penguin parents share the incubation period and after around 31 to 38 the egg hatches. The Snares Penguin care for the chicks together for a period of three weeks and after that they take turns to go out feeding. It is their responsibility to make sure that the chick is fed daily until it is around 75 days old where it is left to go to the sea. Their population is around 30,000 pairs.

Diet of the Snares Penguin

The Snares Penguin mainly feed on small fish, euphausiids, cephalopods, squid and krill. It is interesting to note that when they are feeding they organize themselves in small groups and they make shallow dives. Snares Penguins can drink sea water.

Enemies of the Snares penguin

The Snares penguins worst enemies are the sea lions. Their eggs are always in danger of being preyed by brown skuas and giant petrels.

Molting of the Snares penguin

Snares penguins have to eat a very large quantity of food when possible. They need to build up layers of fat. When the Snares penguin are on land for mating or when they are Molting -(of an animal-shed old hair skin, or an old shell, to make way for a new growth that will occur, the adult Snares penguins were already molting into their winter shades of gray), they rely on the layers of fat to help them survive, as when the time they are unable to go to the water for food. Penguin regularly preen (meaning of a bird, cleans and straighten its feathers with its beak)

Search the Web for More information on Snares Penguin at LookSeek.com Search