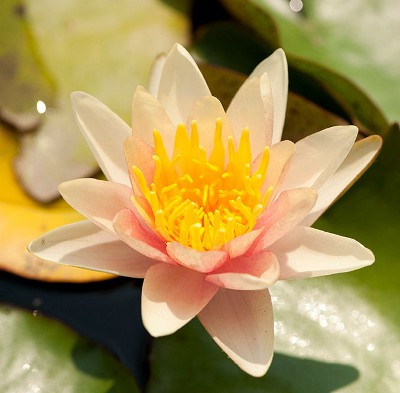 The lotus plant can grow horizontally across spreading to about three to five feet (.91 to 1.52 meters). The Sioux Water Lily plant is a free flowering plant. The blooms of the lotus can establish to a height of three to four inches (7 to 10 cm). Each flower has about nineteen to twenty petals with their blooms raised just at the water surface.

The flowers of the Sioux Water Lily forms a star shape with changing colors of deep orange to coppered to chrome yellow with deep yellow stamens. Sioux Water Lily leaves grow eight to nine inches (20 to 23 cm) wide with a deep green color. The free flowering bloomer can have its flowers stay open the entire day, extending very late in the day.

The plant has colorful floating blooms which enhances the pod to which they are established. It is a favorite of various pond and aquatic garden owners. When established, the plant can grow approximately twelve to eighteen inches (30 to 46 cm) deep.

The Sioux Water Lily can be consider to be a true bowl pot plant as it can do well in containers. However, it can also be established in ponds.

It requires a two gallon (7.5 liter) container or larger. In additions, soils must be well drained. The Sioux Water Lily plant requires a partial shade to full sunlight.


The Sioux Water Lily can greatly blossom when planted in early springs. However, for it to establish well, the water temperature must reach 45 F degrees (7.2 cel).

Search the Web for More information on Sioux Water Lily at LookSeek.com Search