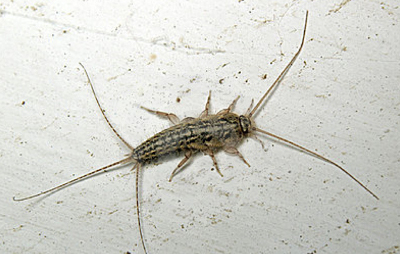 The insect family is found in Africa, the Americas, Australia and Europe. Silverfish Insect are traced back to some of the most primitive insects that appeared around 300 million years ago. The jumping bristletails they have (spines on their ends) leave distinctive tracks, some of which have been dated to 400 million years ago.

Silverfish Insect have a multi-stage courtship ritual. After the ritual, the male lays his sperm capsule which the female takes into her body to fertilize the eggs. The female Silverfish Insect lays groups of eggs in side of a crevice. The number of eggs laid varies on the species of Silverfish Insect, but rages from two to twenty per laying. The eggs take two to eight weeks to hatch.

You can control Silverfish Insect by controlling humidity. In crawl spaces, open vents and basements, use baseboards that have caulking. Limit the number of potential feeding sites and store food in containers the Silverfish Insect can’t enter like plastic Tupperware with lids or glass jars. Cinnamon will repel them but not kill them. You may want to put a dehumidifier in infested areas, eliminate standing water and fix leaky plumbing.

Search the Web for More information on Silverfish Insect at LookSeek.com Search