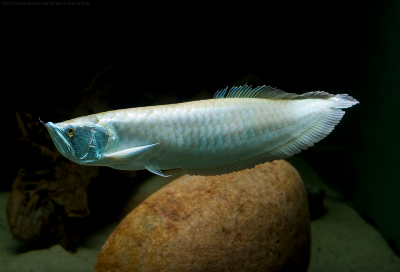 Silver arowana is a freshwater bony fish which belongs to the family of Oseteoglossidae. It is known by many names which leaves doubt on what the real name. Again, it has some interesting facts.

People call it monkey fish because it can jump from water to catch its prey. Those who keep it in aquariums call it dragon fish because of its shiny body and its double Barbels.

This fish is mostly kept in aquaria. It inhabits Amazon Basin, Oyapock Rivers, Guianas and Rupununiis in South America.

Silver arowana is a carnivore and it mostly feeds on crustaceans, insects, water fleas, mosquito larvae, krill and small fishes. But its stomach has been found with the remains of snakes, bats and birds. It is known to swim near water surfaces so that it can hunt its prey.

If you decide to keep it in a tank, a 250 gallon tank is suitable. This accommodates the fish large size. Again, the tank should have a tight lid, fine gravel; enough water and open space to enable it swim well. The reason for putting a tight lid is to prevent the fish from jumping out.

It has an interesting breeding story. Just after breeding the male carries the eggs in its mouth until they mature. They take around 50-60 days to mature.

The fish does well when sharing the tank with ornate, Bichirs and knife fish. But one should be careful because the same can attack the young ones.

Caring is not hard as long as you feed it well. it is not a very aggressive fish apart from jumping when searching for food.