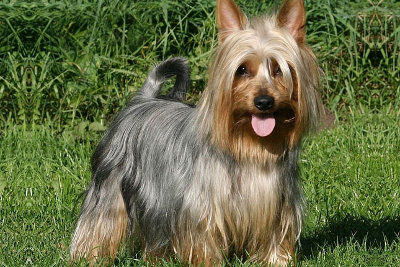 Dogs have two times the amount of ear muscles than people. It is a fact a Dog can hear a sound at four times the distance of a human. Sound frequency is measured in Hertz (Hz) Def-Hertz is the measurement of frequency, explicitly it's one cycle per second. The higher the Hertz are, the higher the pitched the sound is. Dogs hear best at 45,000 Hz to 65,000 Hz, while humans hear best at around 20 Hz to 20,000 Hz.

Though the matured female Silky Terrier Dogs are smaller than the male ones, the Silky Terrier breed is capable of attaining the height, ranging from (23 to 25 cm), with the varying body weight between (4 and 5 kg).

The Silky Terrier Dog breed is extremely prone to mats and tangles, so it requires daily brushing and combing. The Silky Terrier Dog sheds slight to no hair.
It is a Fact a Silky Terrier Dog sees in color and have better low light vision. Silky Terrier Dogs have three eyelids, a lower lid, an upper eyelid lid and a third lid, that is called a haw or nictitating membrane, this keeps the Silky Terrier Dogs eye protected and moist. Dogs eyes have a special membrane for seeing better at night, called a tapetum lucidum - a dogs reflective layer in the choroid chiefly of nocturnal, causing the eyes to glow when light at night hits the eyes and they consist of some layers of smooth flat cells covered by a section of double deformed crystals.

The average lifespan of the Silky Terrier Dog breed ranges from 12 years to 15 years. In 1959 the Silky Terrier Dog was recognized by the AKC (American Kennel Club) and established in 1962 the dogs standard and than later it was updated in 1967.
When purchasing a Silky Terrier Dog from a breeder, make sure to find a good breeder with references check at least two to three of the puppies that were purchased from this breeder, check with the people who purchased them.

Average body temperature for a dog is between 101 to 102.5 degrees
Female dogs are in heat for matting for about 20 days twice a year. Female dogs are pregnant for 60 days before they’re puppies are born.
A dog is an omnivore, (definition-they eat both other animals and plants). All Dogs are direct descendants of wolves.

The number one heath problems amongst dogs is obesity, so always make sure your dog doesn't get to fat. Many foot problems that dogs have are just an issue of long toenails.

A Silky Terrier Dog’s mouth can apply approximately 150 to 200 pounds of pressure per square inch and an American Pit Bull Terrier, German Shepherd Dog and a rottweiler can have 320 LBS of pressure on avg.

Dog’s nose prints can be used to identify them, their nose prints are like a humans finger print. It is a Fact a dog smells more than 1,000 times stronger than that of a human. A dog’s nose, secretes a thin layer of mucous that helps it absorb scent, after that they lick their noses and sample the scent through their mouth.