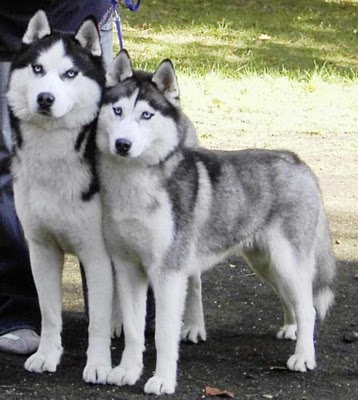 A Siberian Husky Dog’s mouth can apply approximately 150 to 200 pounds of pressure per square inch and an American Pit Bull Terrier, German Shepherd Dog and a rottweiler can have 320 LBS of pressure on avg.
Being alone to its devices without much human or dog contact everyday might make it howl its heart out. The Siberian Husky Dog is rambunctious and loves to play and yearns for human contact. The Chukchi people would leave the Siberian Husky Dog to look after their young children. But this wolf-like looking Siberian Husky Dog does not take kindly to contact with animals like birds, cats and any other small pets or wild animals. Leaving it alone with one of these animals might result in the disappearance of the animal.
Being used to leadership, the Siberian Husky Dog requires proper training for it to recognize it's leader quality. The Siberian Husky Dog also needs an outlet for the high amount of energy it has. So taking it out for daily or frequent exercises will be wise. The only problem is that Siberian Husky Dog might escape from the person’s clutches because of its tendency to explore and roam are very high. So putting a tag with the owner’s name, address and contact number on it might be wise. Daily grooming of Siberian Husky Dog thick double coat especially during a hot day is also required.

The number one heath problems amongst Siberian Husky Dogs is obesity, so always make sure your dog doesn't get to fat. Many foot problems that Siberian Husky Dogs have are just an issue of long toenails. Common health issues include; canine hip dysplasia, (PRA) Progressive Retinal Atrophy, displacement of the urethra (Ectopy), juvenile cataracts and corneal opaqueness. They are also prone to a skin condition called zinc responsive dermatitis which can be solved by giving zinc supplements. Most of their health problems can be averted through regular visits to Veterinarian.

Search the Web for More information on Siberian Husky Dog at LookSeek.com Search