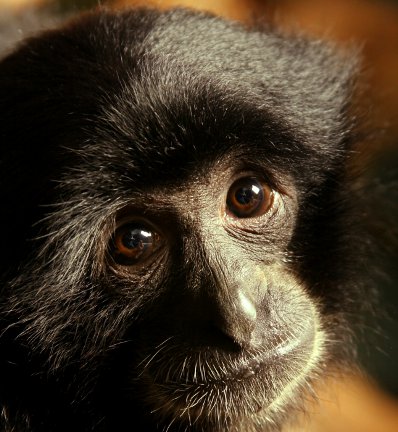 Facts about Siamang gibbon apes. Scientific name for Siamang gibbon ape is symphalangus syndactylus. Siamang gibbon apeal is also known as Siamang are black furred gibbons found in the forests of Sumatra, Thailand and Malaysia. The Siamang gibbon apes are the largest of the lesser apes and researchers have found that they can grow twice as big as other gibbons. The average height is 29 1/4 to 39 5/16 inches (74 to 100 cm).
The average weight is 22 to 30 pounds (10 to 14kg) Life Span: 35 to 40 years. It is the sole species in the Symphalangus genus.
Monkey meaning (any mammal of the order Primates), this includes the macaques, capuchins, guenons and langurs, this excludes humans, the anthropoid apes, and, usually, the prosimians and tarsier.

The Siamang gibbon apes derives its scientific name syndactylus from having joined digits on every foot. They possess a gular sac which is a throat pouch that allows them to make loud calls. The Siamang gibbon ape can inflate the size of the pouch to various sizes depending on the type of sound they want to make. Their arms are longer than their legs which help them to leap from one tree to another. The Siamang gibbon ape hair is dense, shaggy and darker than all other gibbons. They do not have hair on their face apart from a moustache.

The Siamang gibbon apes lives in families consisting of a male, female and infants. It is also possible to come across a Siamang gibbon ape group with a sub-adult among them. The sub adult eventually leaves at the age of six to eight years to start up a family. The sub-adult females leave their families earlier than the males. Their gestation period is 6 to 7 months 10 days. The female Siamang gibbon ape are in charge of taking care of the infant for the first year after it is born. After that, the males take up the role of caring for the infant until it is three years old. During this period, the males carry it in case they are traveling for a long journey, only returning to the females to nurse and sleep.

Many of the Siamang Gibbon Apes are known to lead a monogamous lifestyle, and they spend a lot of time with their mates. Researchers have however discovered that they are both polyandrous and monogamous group in the South Sumatra region. The infants from monogamous families receive more care and attention than those from polyandrous groups.

These Siamang Gibbon Apes spend a large part of the day resting after which they feed, move around and engage in social activities. The Siamang gibbon ape lie on their backs or stomach on top of large trees when they are resting. The adult males enjoy grooming more than the females and, therefore, take the lead when the time arrives. Grooming is important for the species for it helps them to enhance their social interactions.

Search the Web for More information on Siamang Gibbon Apes at LookSeek.com Search