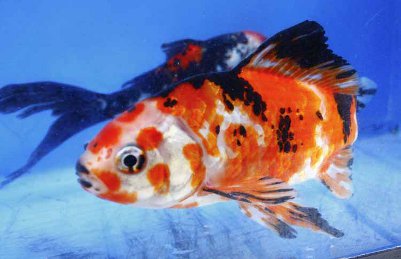 The Shubunkin goldfish origin: is from Japan and looks similar to the common goldfish and comet goldfish by apperance. Their scales sometimes look (pearl like) with dark speckle looking. Other noticeable marks are patches of blue, red, white, brown, purple, and grey. Shubunkin goldfish with a more blueish color that are rare and are thought to be more valuable, its said that it is often referred to as the Calico Goldfish. Other descriptive names for this fish are Harlequin goldfish, Coronation goldfish ,and Speckled Goldfish. Environment Facts: Freshwater goldfish Native to: Japan and Asia. Diet: flakes and pellets, brine shrimp (either frozen or live), blood worms, Daphnia, or tubifex worms as a treat. Gold fish do not have a stomach, so feed them a couple of times a day, but in smaller portions. Water Temperature: 65 to 78 degrees F
The Shubunkin goldfish are also very social and do very well in a communities. The shubunkin goldfish is a great fish but never keep a shubunkin with a fantail or visual handicapped fish because this may result in fighting. The Shubunkin Goldfish is a stretched out, flat-bodied combination of goldfish. The head is wide but short and it has a evenly tapering body shape from its back and belly to the base of its caudal fin [tail-fin]. The caudal fin is forked. Its fins generally stand straight up and the edge of the dorsal fin is slightly curved.
The Shubunkin Goldfish is generally smaller than a common goldfish. The environment the goldfish is kept in is a determining factor on whether your fish grows to its full size. In an normal 10 gallon tank, if well taking care of and not crowded, the goldfish will grow up to about 4 inches (10 cm). In a bigger uncrowded tank the goldfish can grow larger, reaching about 6 inches (15 cm).
Goldfish lifespan The average goldfish lifespan is 10 � 15 years, but living 20 years or more is not unusual in goldfish aquariums and ponds that are well taking care of. Size of Shubunkin: 18.0 inches (45.72 cm) - This size is possible for fish in very well maintained large tanks and ponds. About five inches is a more likely adult size for the Shubunkin Goldfish.
Add gravel to the fish tank, and other aquarium decorations as desired. Provide some live or fake plants, allowing plenty of open space for swimming. Let the water sit uncovered a day before you release your shubunkin goldfish.
into the fish tank.
Be sure to do a regular 25%-30% water change each week to maintain water quality. Maintain tank water conditions at a pH range of 6.5-8.5.
You need the proper filter. Goldfish create a lot of waste and are known for being messy. your filter should completely clean the water at least ten times an hour. If you have a twenty gallon tank, you will need a filter that can handle the waste of at least 200 gallons per hour. A filter that cleans more than ten times the amount of water in the tank is more than adequate.
Prepare the tank. Read up on the nitrogen cycle in aquariums. You will need to purchase a liquid test so that you can test for Nitrates and Ammonia. Strip-style test kits are unreliable and a waste of money. Use a dechlorinating product to remove the harmful chlorine from the water. Get coffee bean sized gravel for the bottom of the tank (if it is any smaller and the goldfish could accidentally swallow some while feeding). Make sure any rocks or gravel are metal-free, since rocks with metals can harm fish by leaching toxic residues into the surrounding water.
To decorate your tank, Buy a few ornaments and decorations and fake plants. Do not buy ornaments with openings small enough that the fish can get stuck in them! Remember to consider how large your goldfish can get.

Search the Web for More information on Shubunkin Goldfish Raising and Care at LookSeek.com Search