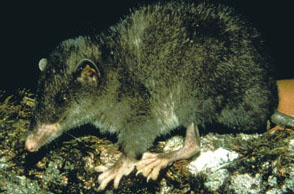 Facts about Shrew Opossum. "Scientific name for Shrew Opossum is Caenolesidae". The Shrew opossum is part of the order Paucituberculata. There are six species of Shrew opossum, also called rat opossum, in this order. They are called shrew opossum because they are the size of rats, whereas the more common opossum species are closer to the size of a house cat.
Shrew possums are not shrews, but their territories and ecological niches often overlap. The Shrew opossum is a marsupial. All half dozen species of the shrew possum live in a South America. The common gray shrew opossum or Caenolestes fuliginosus is the largest shrew opossum at almost a foot long including the tale. The Chilean shrew opossum is much smaller, weighing around an ounce fully grown. Then there are four species of Incan shrew opossum.
Shrew opossum have poor eye sight. They rely on their hearing and the whiskers on their snouts to find insects and worms to eat. They use their sense of smell to find fruit to eat. They have long narrow snouts like the larger common opossums. Their tails are about equal in length to the rest of the body.
They prefer to live in temperature forests with thick ground cover. The Chilean shrew opossums live in the temperate forests in southern Chile. Incan shrews live in southern Peru and Bolivia. The common shrew opossum also lives in the subtropical forests of the Andes.
Males and female Shrew Opossum have different types of teeth. Males have single rooted canines, while females have double rooted canines. However, males and females are roughly the same size as adults. The shrew opossum lack the distinctive big toe of the American opossum, which can be used like an opposable thumb. All opossums in this family have gray fur. All of the possums in this family have four mammary glands except the Chilean shrew opossums,

Search the Web for More information on Shrew Opossum at LookSeek.com Search