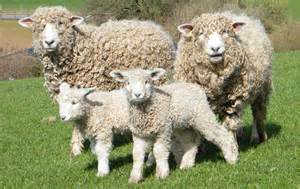 In the world there are over 1 billion sheep and China has the most sheep in the world. In Central Asia sheep were domesticated 10,000 years ago. During biblical times sheep production began. A "flock or herd" is a group of sheep. "Lamb" is the name of a young sheep and it is called a sheep or "hogget" at one year old. "Ewe" is the name of the female sheep. "Ram" is the name of the adult male sheep. "Wether" is an adult castrated male sheep. The act of breeding for sheep is called "tubing". Sheep give birth to 1 to 3 baby lambs once or twice a year. "lambing" is the act of giving birth for sheep. A lamb weighs on average when born, about 5 to 8 pounds (2.2 to 3.6 kg). Sheep are born without or with horns (polled). The high pitched sound a baby lamb makes is called "bleating". The length of a pregnancy (gestation period) for a ewe is about 145 to 156 days.

Sheep have a 300 degrees field of vision and sheep do not have to turn their head to see behind them and they have excellent hearing. Sheep have long been used to control unwanted vegetation. Sheep are used throughout the Inter mountain and Great Plains region to control invasive and noxious weeds. Throughout the West, Spotted Knapweed (Centaureamaculosa). This weed is invasive and invades ranges and threatens our national parks. Sheep will eat knapweed and are being used to help control this weed. Sheep that are breeding are called "Tupping". Dolly the sheep was the first cloned mammal in 1996 from a somatic cell. Shelter is not necessary in the rain but they do seek shade from the sun. There are over 900 different sheep breeds in the world and 40 different breeds of sheep in the United States. A Sheep does not have teeth in their upper front jaw. Sheep have 32 teeth. Sheep have 24 molars and 8 incisors in their mouth. A sheep has only lower teeth that press against an upper palette.

Milk from Sheep is mostly used to make gourmet cheese. A sheep has an average body temperature of about 102.5˚F (39.1˚ Cel). Fat extracted from a sheep, is known as tallow, this is used to make candles and soap. Wool exporting began around 1700 by America. When President Woodrow Wilson was in the White House you would see sheep grazing on the lawn. Wool sheep are usually shorn (a past participle of shearing "to cut") once a year. A lambs is usually sold on average for meat between 90 to 120 pounds (41 to 54.4 kg). "Mutton" is the name of the meat from a full grown sheep. There is a split in the sheep upper lip which allows them to select their favorite leaves off a plant. A sheep has a life expectancy between 6 1/2 to 11 years. The average rate of breathing for a sheep is 16 breaths per minute. Milk from sheep has a higher level of zinc, calcium, protein, fat, riboflavin, thiamine and niacin than milk from cows or a goat. They us 11 sheep small intestines to make 1 tennis racket.
A Sheep is a herbivores, that eats leaves, grass, hay and furns. A sheep has four chambers to its digestive system that helps break down what they eat. Sheep are "Ruminant" is any hoofed even-toed, mammal that digests its food in two stages. First by eating the raw materials and regurgitating a semi-digested form known as "cud" (ruminating: chewing the cud.) then eating the cud.
A sheep on its back is not a good thing, you need to help, sheep can’t get up from that position, being on its back can be a hazard to its health.

Search the Web for More information on Sheep Facts at LookSeek.com Search