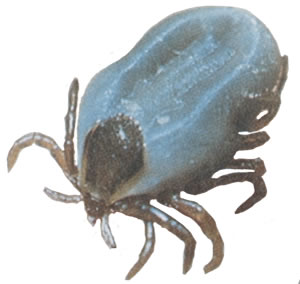 Facts about Scrub Ticks, "Scientific name for Scrub Tick is Ixodes holocyclus". It is commonly known as Australian paralysis tick and believed to be medically very important compared to all other ticks. This is because the scrub tick is known to cause paralysis to its host once it injects neurotoxins in the host’s body. The habitation of the Scrub Tick makes it the most commonly encountered tick by human beings and their pets as well as livestock. Since the Scrub Tick is fond of highly populated areas it is not uncommon to hear of scrub tick bites whenever it is concerned.

The Scrub Tick is found in high rainfall areas as well as temperate rainforests. The scrub tick has its natural host in kangaroos, koalas, bandicoots and possums.

The scrub tick has a four stage lifecycle namely: egg, larva, nymph and adult. The incubation period of the scrub tick lasts between 40 to 60 days after which six legged larva is hatched. This larva seeks out a host where they can get blood and they feed on their host’s blood for about six days after which they fall off the host and undergo molting. After the molting stage they become 8 legged nymphs.

To become adults the nymphs require yet another meal of blood. For female Scrub Tick adults to lay 3000 eggs they require a third meal of blood of about ten days. After the ten days the adult female tick falls off the body of its host and is able to lay the 3000 eggs in a leaf litter.

Mating of the Scrub Tick takes place on the body of the host where the female has attached herself. During this period the male Scrub Ticks also take advantage and get some blood for themselves. The entire life cycle takes about 365 days but can go beyond one year.

Nymphs have four pairs of legs while the larva has three pairs of legs. In order to complete the life cycle process this species requires three hosts where it can get an adequate blood supply.

Search the Web for More information on Scrub Tick at LookSeek.com Search