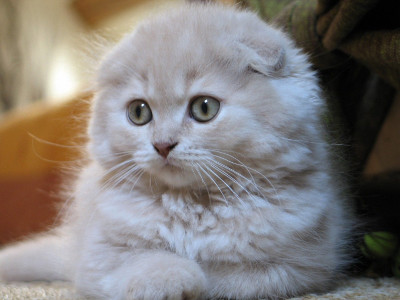 Although the Scottish Fold Cat is intelligent and sweet tempered, it is famous for easy adaptation to new people, environment and situations. Apart from being loyal, they tend to become familiar with one person of the family. It doesn’t mean that they don’t entertain others. They play with, allow other family members to cuddle and pet them as well, but their primary concern and attachment goes to one person. As soon as they are introduced to a household, they make it clear in mind that with whom they will be more familiar with. They enjoy attention, but anything that deals with them directly should be on their own terms.

They don’t enjoy sitting on the lap, rather they would sit along with you, beside you. They are devoted, but become demanding at times. They are active with game of fetch and carry that playful attitude through their adulthood. Breeding and health problems being the main difficulties, Scottish Folds have earned their standing in the cat world.

Degenerative joint disease, mostly in the tail and can also be in the knee and ankle joints, causing the Scottish Fold Cat poor mobility or pain. If it develops stiffness in the tail, it’s important to handle the care. Hypertrophic cardiomyopathy, is a form of heart disease and can develop in the Scottish Fold Cat breed, but has not been proven to be hereditary. The health may have deformities if the cat owner gets a bit more passionate about the ear folds. The gene responsible for folding of the cartilage also affects other bones and cartilages. When two Scottish Folds with folded ears are crossed, the kitten usually has more number of folds in its ear and such kittens don’t live long. They show severe health hazards and die out of painful sickness. However, the hearing abilities of the cat doesn’t get hampered with any number of folds in a Scottish Fold’s ear.
Cat Facts

Search the Web for More information on Scottish Fold Cat at LookSeek.com Search