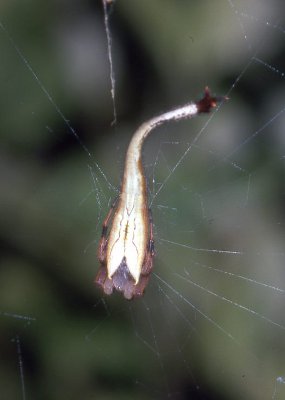 Males are similar to the female Scorpion Tailed Spider but are more reddish. They are also smaller at about 2 mm and don’t have a tail at all. Female bodies have shades of brown and cream but mostly fawn with a black tip of the end of the abdomen. The Scorpion Tailed Spider legs and dephalothorax are darker brown and juveniles have bright colors which are yellow through pink. The females are around 15 mm long. It is add to see scorpion tailed spiders when they are on their webs because they look like dry leaves.

Scorpion tailed spiders build permanent orb web which are incomplete close to foliage on. The Scorpion Tailed Spider cannot tolerate living in places where there is a tendency of drying up so they like living in burrows. The webs are suspended on an angle but do not have a V-shaped section at the top. During late summer the female Scorpion Tailed Spider produces woolly yellowish eggs sacs which they string up in a line to fill the missing section of the webs. The eggs sacs are placed from the center to the top of the missing V-section. These eggs sacs are normally camouflaged with debris.

In the Scorpion Tailed Spider the oxygen is bound to "hemocyanin" a copper-based protein that turns their blood blue, a molecule that contains copper rather than iron. Iron-based hemoglobin in red blood cells turns the blood red

Spiders do not have a skeletons. They have a hard outer shell called an exoskeleton-(a rigid external covering for the body in some invertebrate animals). The exoskeleton is hard, so it can’t grow with the spider. The young spiders need to shed their exoskeleton. The Scorpion Tailed Spider has to climb out of the old shell through the cephalothorax. Once out, they must spread themselves out before the new exoskeleton will harden. Know they have some room to grow. They stop growing once they fill this shell. Female spiders are usually bigger than males.

Search the Web for More information on Scorpion Tailed Spider at LookSeek.com Search