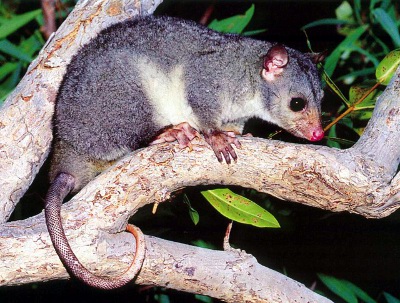 Scaly-tailed possum is quite similar in appearance as its close relatives the cuscuses and the brushtail possums. The only significant difference lies on the physical appearance of the tail. Just as the name suggests, it has a naked tail – which means it is without far as its main body and is only covered with scales as the reptiles.

There is no difference in dimensions between the females and the male Scaly-tailed possum. They have a fine body coat, short, dense and with a pale grey color on top and creamy white at the bottom. Scaly-tailed possum has a faint dorsal strip line that runs from between its ears to the rump. It has small flat ears; they have large protruding dark brown eyes. They have a flattened head this can be attributed to its adaption in rocky fissures. It has a head and body length of about 11 7/8 to 15 3/4 inches (300 mm, and 400 mm) for the tail, and generally weighs about 4.4 pounds (2.0 Kg)

When handled the Scaly-tailed Possum has been noted to be very aggressive, this include biting, hissing and scratching the handler.

The Scaly-tail possum is probably omnivorous but dominantly herbivorous animal that will generally feed on flowers, leaves and fruits. They have been noticed feeding on the foliage and blossoms of Eucalyptus spp.

The Scaly-tailed possum can always be noticed on top of trees feeding and if they feel uncomfortable they can choose to get down on the ground to increase mobility.

The Scaly-tailed Possum is mostly found in high rainfall regions. And the most preferred habitat includes sandstone that is based in woodlands as they enjoy sheltering in rock piles and feed in the trees.

This specie of Possum will reed during the dry season, and according to the region they are common this is between March and August.

Unlike other breeds of Possums, the Scaly-tailed Possum will produce one young one at a time.

Search the Web for More information on Scaly-tailed Possum at LookSeek.com Search