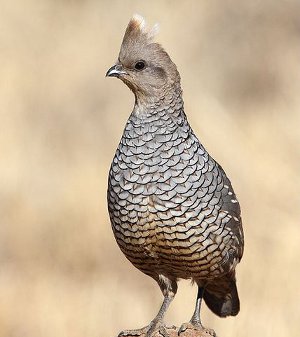 Facts about Scaled Quail bird. "Scientific name for Scaled Quail is Callipepla squamata". The Scaled Quail, also known as Blue Quail or Cottontop Quail, is a familiar bird of arid West. This species is an early offshoot of the genus Callipepla, diverging in the Pliocene.
The Scaled Quail is named for the scaly appearance of its breast and back feathers. Along with its scaly markings, the Scaled Quail is easily identified by its white crest that resembles a tuft of cotton. Small, chunky, short-tailed, round-winged, ground-dwelling bird length 8 inches (20.3 cm). The Scaled Quail bird has a Gray-brown head with white-tipped crest, Gray-brown upper wings, blue-gray about neck, upper back and chest with black scaling Buff belly scaled with black, gray flanks with white streaks
Two of the four subspecies of Scaled Quail occur in Texas. The most abundant subspecies, C. s. pallida, resides in the High and Rolling Plains, Trans-Pecos, and Edwards Plateau regions of Texas. C. s. castanogastris inhabits the South Texas Plains. Scaled Quail live in desert grasslands and shrublands of the Southwest, including open plains, hills, mesas, sagebrush, and pinyon-juniper woodlands. Scaled Quail are highly social and live in large groups (coveys) from September to April, when pairs form and the coveys break up for the breeding season.
Scaled Quail are opportunistic eaters, seeds are consumed year-round. Large seeds (such as those of mesquite and snakeweed) are important in Scaled Quail diets. Other seeds include those of elbowbush, catclaw acacia, mesquite, hackberry, Russian-thistle, rough pigweed, and sunflowers, ragweeds, and other Asteraceous plants.
The ground nest of the Scaled Quail is a depression lined with grass stems and leaves and are usually hidden in thick vegetation. Both males and females construct the nest, which is around 3 inches (7.6 cm) deep and 9 inches (22.8 cm) across. Clutch sizes average about 13 to 14 eggs. Nesting period of Scaled Quail may extend from May through September. Incubation lasts for about 23 days and young weigh almost as much as a full grown adult Scaled Quail at 11 to 15 weeks. Males rarely assist in incubation. Successful nests hatch from 10-14 chicks. Nests are usually found near water and males assist in defending the brood and nest.

Search the Web for More information on Scaled Quail at LookSeek.com Search