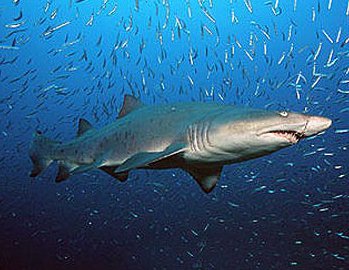 Facts about Sand Sharks, "Scientific name for Sand Sharkis Carcharias taurus". Sand sharks belong to the family of odontaspididae. The Sand Sharks are found all over the world especially in temperate and tropical water except eastern pacific. They have a large second dorsal fin and can grow up 10ft (3.04 meters) in adulthood. The Sand Shark weigh around 440 pounds (200 kg). Sand sharks live for seven years though if they are held captive can live longer. The name Sand Shark comes about due to their tendency towards shoreline habitats. They are often seen on or close to the shore.

Sand Sharks have brown markings on the upper half though they disappear as they grow. Their teeth are needle like, long, narrow and sharp with smooth edges. The Sand Shark protrude in all parts even when the mouth is shut. An amazing thing is that despite of that they are very docile and unaggressive.

The Sand Shark have very unique and exceptional hunting skills. They are able to gulp air from the surface and collect it to the stomach thus helping them to become buoyant. In fact the Sand Shark are the only sharks that display this type of habit. This gives them the ability to attack their prey motionless.

The Sand Shark hunt in groups occasionally and can even attack fishing nets. The staple foods for sand sharks are small fish, crustaceans and squid.

The Sand Shark are mostly active at night than in the day time. Sand sharks are dangerous when provoked but generally they are peaceful. In fact the Sand Shark don’t attack humans because if you provoke them they will just ignore you and move on.

Among all sharks, sand sharks reproduction is very interesting. They mostly give birth around the winter season. Since they are ovoviviparous their eggs evolve in uterus feeding on unproductive eggs till birth. The Sand Shark are believed to carry the pregnancy for 9 months to 1 year thus giving birth to one or two pups. This explains why their population is low.
There are over 400 types of sharks, Sharks have the most powerful jaws on on earth. Sand Sharks jaws, both the upper and lower jaws move. Sand Sharks skin is made of denticles instead of scales like other fish. The denticles are constructed like hard, sharp teeth (tooth-like projection) and this helps to protect the Sand Shark from being injury. The Sand Shark is carnivores, meaning: an animal that feeds on flesh (Meat). "Scientific name for Shark Selachimorpha"
"Fear of Sharks Selachophobia".

Search the Web for More information on Sand Sharks at LookSeek.com Search