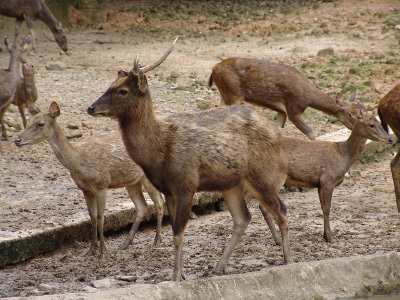 Sambar Deer is also referred as Rusa uniclolor and the name sambar sometimes are used to refer to the Philippine deer. The name can also be spelled as sambur or sambhur but means the same thing.

This deer is native to Southern China and the South Asia though they are diminishing by day. They inhabit Eastern and Southern Victoria as well New South Wales.

There sizes differ widely across their range which can be very confusing. But generally Sambar deer have a height of 102 to 160 cm. The shoulders are 40 to 60, the head and the body length varies from 1.62 to 2.7m. Sambar deer weigh around 546kg.

Sambar prefers to live in dense shrubs and woodland. They feed on several vegetation which include; grasses, browse, water plants and fruits. This depends on the local habitat though they also consume a variety of shrubs and trees.

The samba deer are preyed by several animals. Tigers are among the top in the list because they even mimic the deer and deceive them. But for the crocodile they try to prey the sick ones that cannot be able to move fast.

Samba deer are nocturnal. The females lives in small herds and may stay up to sixteen individuals. In other areas you may find them living like three to four individuals who are; the adult female, her youngest calf, a subordinate and a immature female. The male stay alone all year round.

Sambar deer mate and reproduce all year round though calving peaks seasonally. The male is the one that establishes a territory whereby it attracts the females around. It stomps the ground and create a bare patch. Interesting females are the ones that move widely to look for males for mating purposes.

Gestation lasts like eight months and one calf is born at a time. There are few occasion where twins are born but it is not very popular. The calves weigh around 5 to 8 kg at birth and they take solid foods after two weeks.

When in the wild sambar deer live for around twelve years but if in captivity they live for twenty eight years.

Generally loves to congregate near water since they are good swimmers. Sambar deer are very quiet and in most of the times they don’t make noise unless when they are threatened. They communicate by foot stamping and scent marking.