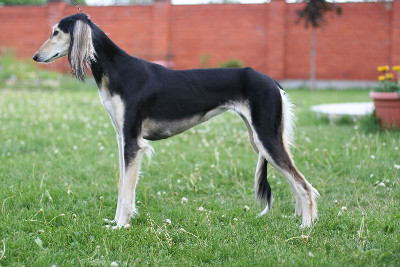 Facts about Saluki Dog, "Scientific name for Saluki Dog, or domestic canine, is Canis lupus familiaris". The Saluki Dog is also called the Persian Greyhound, Arabian Hound, or the Gazelle Hound. It originates from Eastern Turkestan and also in Turkey. It is closely related to the Afghan Hound. The Saluki Dog is one of the oldest domesticated dog breed. It was the royal dog of Egypt and was named after the Arabian city "Saluki" which was found in the Middle East. The dog's bodies were found mummified alongside Pharaoh's. Their pictures appear in ancient Egyptian tombs. The Muslims found them a sacred gift of Allah. The Saluki Dog were regarded to be very fast on terrain and special. They were used by the Arabs to trail and hunt gazelles. The Saluki Dog have recently been successful in many dog races.

All dogs are identical in makeup big or small– 42 permanent teeth and 321 bones. Saluki Puppies have 28 teeth and when they become adult Saluki Dogs they have 42 teeth.
Female Saluki Dogs are in heat for matting for about 20 days twice a year. Saluki Puppies for their first few weeks will sleep ninety percent of the day and their vision is not fully developed until after the first month. Female Saluki Dogs are pregnant for 60 days before they’re puppies are born

The Saluki Dog is a Greyhound-like dog which is slim and can grow up to an average height of the Saluki Dog to the shoulders is 23 to 28 inches (58.4 to 71.1 cm) and the average weight is 30 to 65 pounds (13.6 to 29.5 kg). The Saluki Dog has a narrow, long head which is relatively wide between the ears tapering toward the nose. Its nose is liver or black in color. Saluki Dog ears are long and hang downwards closed to the head. It has large hazel to dark-colored eyes which are oval-shaped. Saluki Dog has straight font legs with a thick haring between the toes. Its neck and tail is long and its body is well covered in hair. Its coat is short and has a silky feathering around the tail and ears. However, some can have coarser to smooth coats. Saluki Dog coat can either be golden, black grizzle, cream fawn, white, red or tan. Saluki Dogs sweat glands are between their paw pads.
A Saluki Dog sees in color and have better low light vision. Saluki Dogs have three eyelids, a lower lid, an upper eyelid lid and a third lid, that is called a haw or nictitating membrane, this keeps the dogs eye protected and moist. Saluki Dogs eyes have a special membrane for seeing better at night, called a tapetum lucidum - a dogs reflective layer in the choroid chiefly of nocturnal, causing the eyes to glow when light at night hits the eyes and they consist of some layers of smooth flat cells covered by a section of double deformed crystals

The Saluki Dog is a friendly, affectionate, even-tempered, gentle dog which can be devoted. The dog is sensitive, loyal and can become attached to an individual. It can be aloof even when in company of their companions and can also make a good watch dog.

The Saluki Dog prefers much warmer temperatures and can live for approximately ten to twelve years long.
When purchasing a Saluki Dog from a breeder, make sure to find a good breeder with references, check at least two to three of the puppies that were purchased from this breeder.
The Saluki Dog belongs to the Hound Group and in 1929 was recognized (AKC) American Kennel Club.
Some of the health problems your Saluki Dog may experiences is Anesthesia Sensitivity, Hemangiosarcoma, Cardiomyopathy and Hypothyroidism.
I big fenced in yard would be ideal for the Saluki Dog to live or a farm or a big country house.

Saluki Dogs have two times the amount of ear muscles than people. A Saluki Dogs can hear a sound at four times the distance of a human. Sound frequency is measured in Hertz (Hz) Def-Hertz is the measurement of frequency, explicitly it's one cycle per second. The higher the Hertz are, the higher the pitched the sound is. Saluki Dogs hear best at 45,000 Hz to 65,000 Hz, while humans hear best at around 20 Hz to 20,000 Hz.

Only humans and Saluki Dogs have prostates, But a dog doesn't have an appendix.
Saluki Dog’s nose prints can be used to identify them, their nose prints are like a humans finger print. A Saluki Dog smells more than 1,000 times stronger than that of a human. A Saluki Dog’s nose, secretes a thin layer of mucous that helps it absorb scent, after that they lick their noses and sample the scent through their mouth.

The number one heath problems amongst Saluki Dogs is obesity, so always make sure your dog doesn't get to fat. Many foot problems that Saluki Dogs have are just an issue of long toenails.

A Saluki Dog’s mouth can apply approximately 150 to 200 pounds of pressure per square inch and an American Pit Bull Terrier, German Shepherd Dog and a rottweiler can have 320 LBS of pressure on avg.

Average body temperature for a dog is between 101 to 102.5 degrees
A Saluki Dog is an omnivore, (definition-they eat both other animals and plants). All Dogs are direct descendants of wolves.

Search the Web for More information on Saluki Dog at LookSeek.com Search