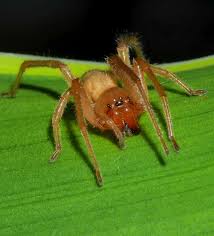 Facts about Sac Spider "Scientific name for Sac Spider is Cheiracanthium punctorium". Sac spider belong to the family of Clubionidae. Sac spiders are believed to have a very confusing taxonomic history. A while ago they were just believed to be a collection of spiders with similar characteristics which were; eight eyes arranged in two rows, have conical anterior spinnerets and wandering predators that builds sacs on plant terminals.

Lately the family has been divided into several families which are closely related to three-clawed spiders e.g. lynx and wolf spiders.

They are normally found walking on foliage; under stones, leaf litter and you can also find them on boards like buildings, under the windowsills. They are harmful and mostly bite humans especially when disturbed. Since they are nocturnal they normally bite at night.

Both species of sac spiders have similar sizes. The females are 5 to 10 millimeters whereas males are 4 to 8 millimeters. But the color differs because you will find each species has different colors that define them. Generally they have the same slightly darker dorsa strip running lengthwise all the way to the abdomen.

They deposit their eggs in June and July. Most of them deposit the eggs on the undersides of the leaves or the foliage. The young ones once they are hatched stay in their habitats until they are able to look for food on their own. They normally go out to search for food at night and hide during the daybreak.

Spiders do not have a skeletons. They have a hard outer shell called an exoskeleton-(a rigid external covering for the body in some invertebrate animals). The exoskeleton is hard, so it can’t grow with the Sac Spider. The young Sac Spiders need to shed their exoskeleton. The spider has to climb out of the old shell through the cephalothorax. Once out, they must spread themselves out before the new exoskeleton will harden. Know they have some room to grow. They stop growing once they fill this shell. Female Spiders are usually bigger than males.

These spiders are active hunters they don’t like capturing their prey within the web. This explains why they bite because they encounter human being in their hunting spree. They most of the times get trapped in between sheets, clothing, shoes and a person’s skin.

Their bite is severe and has a burning sensation which last for an hour or so. It can lead to a blister within ten hours and there are some patients who get fever and a rash.

Sac Spiders have oversize brains.
In the Sac Spider the oxygen is bound to "hemocyanin" a copper-based protein that turns their blood blue, a molecule that contains copper rather than iron. Iron-based hemoglobin in red blood cells turns the blood red

Sac Spiders have two body parts, the front part of the body is called the Cephalothorax-(the thorax and fused head of spiders). Also on this part of the body is the Sac Spider’s gland that makes the poison and the stomach, fangs, mouth, legs, eyes and brain. Sac Spiders also have these tiny little leg-type things called (pedipalps) that are next to the fangs. They are used to hold food while the spider bites it. The next part of the spiders body is the abdomen and the abdomens back end is where there is the spinnerets and where the silk producing glands are located.

The muscles in a Sac Spiders legs pull them inward, but the spider can't extend its legs outward.

It will pump a watery liquid into its legs that pushes them out. A Sac Spider’s legs and body are covered with lots of hair and these hairs are water-repellent, which trap a thin layer of air around the body so the spiders body doesn't get wet. It allows them to float, this is how some Sac Spiders can survive under water for hours. A Sac Spider feels its prey with chemo sensitive hairs on its legs and than feels if the prey is edible. The leg hair picks up smells and vibrations from the air. There are at minimum, two small claws that are at the end of the legs. Each Sac Spiders leg has six joints, giving the Sac Spider 48 leg joints. The Sac Spider’s body has oil on it, so the spider doesn't stick to it’s own web.

A Sac Spiders stomach can only take liquids, so a spider needs to liquefy their food before they eat. They bite on their prey and empty its stomach liquids into the pray which turns it into a soup for them to drink.

A male Sac Spider has two appendages called "pedipalps" a sensory organ, instead of a penis, which is filled with sperm and insert by the male into the female Sac Spider’s reproductive opening.

Female Sac Spiders lay eggs on a bed of silk, which she creates right after mating. Once the female Sac Spider lays her eggs, she will than cover them with more silk.

Search the Web for More information on Sac Spider at LookSeek.com Search