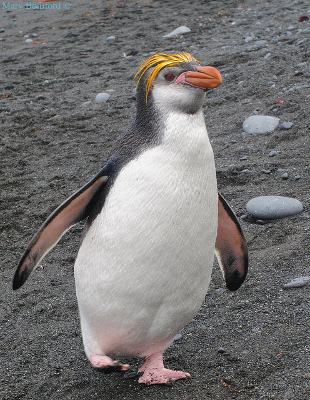 Facts about Royal Penguins. "Scientific name for Royal Penguin is Eudyptes schlegeli". The Royal Penguin live in the southern seas between Antarctica and Australia. About seven months of the year you can find the Royal Penguin in the coastal waters around the Macquarie Island or "Macca" as it is often refereed to. This is a Nature Reserve managed by the Tasmanian Parks and Wildlife Service, which consists of oceanic crust and rocks small shrubs and tussock grass. The Royal Penguin resembles the Macaroni Penguin so much that they are often confused. Currently Royal Penguins are estimated at 850,000 pairs and their largest colony consists of 500,000 pairs.

Features of the Royal Penguin

About the Royal Penguin

You will find Royal Penguins on the surrounding waters of Antarctica but once the breeding season is on they are found ashore on Macquarie Island where they come to breed. Like most penguins, the Royal Penguin is a good swimmer and can swim at a speed of up to 20 mph/ph which is equivalent to 30 km/hr.

Diet of the Royal Penguin

The diet of the Royal Penguin is mainly composed of squid, fish and krill which are also the main diet of most penguins. Royal Penguins have to eat a very large quantity of food when possible. They need to build up layers of fat.
The Royal Penguin have the ability to dive deep for food, but usually find the food closer to the surface. The Royal Penguins can dive for not more than two minutes in search of their prey; at a depth of approximately 50 to 150 feet (15 to 46 meters). Royal Penguin don't drink water, since they take in seawater as they swallow their meal and like all penguins, they have a that special gland that removes salt from their bodies after swallowing saltwater.

Reproduction of the Royal penguin

Royal penguins breed in colonies mainly in October where the female Royal Penguin lays two eggs. The eggs are laid in shallow holes and the first egg laid is not hatched because it is usually quite small compared to the egg laid later. Royal penguins migrate. Their main breeding site is on Macquarie Island, situated somewhere half-way between Antarctica and Tasmania Island which lies about 150 miles (240 km) south of the state of Victoria and managed by the Australian state of Tasmania.
Both Royal Penguin parents take turns to incubate the egg which hatches after 30 – 35 days. After hatching the Royal Penguin female takes up the role of fending for both the chick and the male Royal Penguin that takes up the responsibility of looking after the chick for about two to three weeks.
After 3 to 4 weeks period the chick joins a creche which is a nursery group of other chicks. This way both parents have enough time to fetch enough food for the growing chick.
The Royal Penguin chick is released to go to the sea at 65 days old and at 5 years of age the chicks can breed.

Molting of the Royal Penguin

When the Royal Penguin are on land for mating or when they are Molting -(of an animal-shed old hair skin, or an old shell, to make way for a new growth that will occur, the adult Royal Penguin birds were already molting into their winter shades of gray), they rely on the layers of fat to help them survive, as when the time they are unable to go to the water for food.

Predators of the Royal Penguin

Adult Royal Penguins are normally preyed by Large leopard seals hunt and in the water large sharks and killer whales. Their eggs and chicks are preyed upon by giant petrels, skuas and wekas.

Search the Web for More information on Royal Penguin at LookSeek.com Search