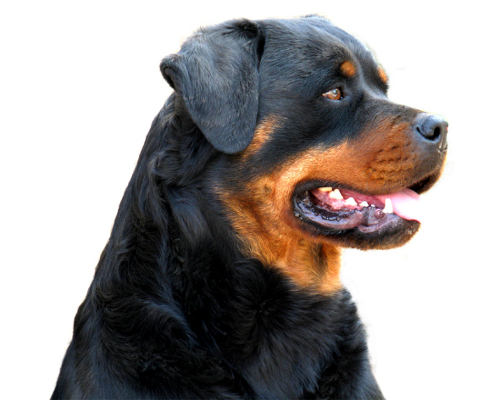 Facts about Rottweiler Dogs, "Scientific name for Rottweiler Dog, or domestic canine, is Canis lupus familiaris". The Rottweiler Dog is a medium to large size breed of domestic dog. The first Rottweiler Dog in 1931 was registered by the AKC. The dogs were known as "Rottweil Metzgerhund - butchers dog- because they were used to herd livestock and pull carts laden with butchered meat and other products to market.

Rottweiler Dogs sweat glands are between their paw pads.
It is a Fact a Rottweiler Dog sees in color and have better low light vision. Rottweiler Dogs have three eyelids, a lower lid, an upper eyelid lid and a third lid, that is called a haw or nictitating membrane, this keeps the Rottweiler Dogs eye protected and moist. Rottweiler Dogs eyes have a special membrane for seeing better at night, called a tapetum lucidum - a dogs reflective layer in the choroid chiefly of nocturnal, causing the eyes to glow when light at night hits the eyes and they consist of some layers of smooth flat cells covered by a section of double deformed crystals.

A Dog mouth can apply approximately 150 to 200 pounds of pressure per square inch and an American Pit Bull Terrier, German Shepherd Dog and a rottweiler can have 320 LBS of pressure on avg.

The Rottweiler dog (enunciated as-ROTT-Wye-ler) is an ancient dog. Rottweil (ʁɔtvα:il) is a city in southwest Germany in the federal German state of Baden-Württemberg, initially it was known as (Rottweil Butcher’s Dog) and later shortened to Rottweiler. The town of Rottweil was a Free Imperial City for nearly 600 years, located between the Swabian Alps and the Black Forest. These dogs were brought to Germany by the Roman army, they were called Drover dogs, and were crossbred with some local breeds to get the Rottweiler Dog of today. The Rottweiler Dog was employed in its traditional roles until the mid-19th century when railways replaced driving or getting livestock to market. While still used in herding, bear hunting etc. Rottweiler Dogs are now also used as search and rescue dogs, as guide dogs for the blind, as guard dogs or police dogs, and in other roles.

The Rottweiler Dog has a muscular, massive, powerful body and a head that is broad with a rounded forehead. The well developed muzzle and the teeth meet in a scissors bite. The lips are black and the inside of the mouth is dark. The Rottweiler Dog eyes are dark colored medium sized almond shaped. On occasions some Rottweiler Dogs have been known to have blue eyes or one brown and one blue eye. This trait does not meet the breed’s strict standard. The Rottweiler Dogs triangular ears are carried forward on the head. The tail is docked (docking tails is banned in most parts of Europe). Removing the extra toe on the back foot is mostly done (dewclaw). The Rottweiler Dog coat is short, smooth, shinny, thick and hard. The dog is black with mahogany to rust markings on its cheeks, muzzle, legs and paws. Brown markings with a red color is also there. The deficiency in the hair gene, makes the coloring a lighter red.

The Rottweiler Dog is powerful, calm, trainable, loyal, protective, courageous, and devoted to their owner and family, they will defend their family fiercely if needed and are seemingly immune to pain.

Rottweiler Dogs love playing catch in the back yard, tagging along for a morning run or taking a big hike in the woods. They crave attention and companionship from their owners. Without it, they tend to get bored and destructive.

Search the Web for More information on Rottweiler Dog at LookSeek.com Search