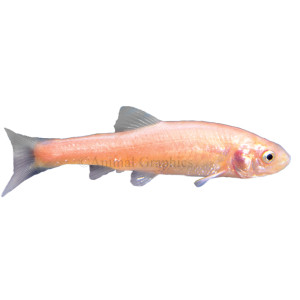 The fathead minnow (Pimephales promelas) other names they are called, Rosy Red Minnow, Rosey Reds, Rosy Reds, Rosies, feeder fish, minnows. The Rosy Red Minnow is a calm group of freshwater fish associated with the Pimephales genus of the cyprinid family. The Rosy Red Minnow is best known for making Schreckstoff (a distress signal). Rosey Red Minnows can also adapt to a wide range temperatures, with it being said to living in temperatures below freezing, and living in temperatures as high as 100F (37C). It prefers temperatures in the range of 70-80F (21-26C), and will breed contently if the water is kept at these temperatures. Males usually grow 2-3 inches and females, 1-2 inches. In the wild the fathead minnow will appear to be dull greenish-grey, with a darkish stripe extending along the back and side, and a lighter belly. There is a darkish blotch halfway on the dorsal fin. The Rosy Red Minnow is normally sold as a tropical fish, but it is really a color different of a native North American fish � the fathead minnow. The fathead minnow is found in many streams and rivers in North America, and its natural coloring is a shinning silver, with the males developing dark horizontal stripes during mating season.
Rosy Red Minnows are great feeder fish and also making it one of the easiest fish to raise. The Rosy Red Minnow will tolerate both poor water quality and low oxygen levels in an aquarium. In the stores you will often see hundreds crammed together with very poor water circulation and you will see many still being active and healthy after living in these horrid conditions.
Rosy Red Minnows can live in many types of water, from mildly soft water to very hard water and a pH range of 6pH � 8 pH.
When the males are ready to breed, they will find a cave and claim it, and defend it against any other Rosy Red Minnow males or other fish in the tank. Plain, unpainted clay pots and cave ornaments from fish stores work very good. Then bury the pots half way on their side in the bottom of the tank this makes for a very good cave. This creates a nice cave environment for Rosy Red Minnows.
Get a good filter that can handle the size of your tank, the sponge filter is good choice, it provides good aeration for the tank and is a lot safer for the fry (baby fish) that will appear at sometime in your tank.
One good reasons to buy Rosy Red Minnows is to experience their mesmerizing, breeding behavior. While most minnows disperse their eggs and show no care from the parents, the Rosy Red Minnow breeding behavior closely resembles a cichlids fish. In fact, Rosy Red Minnows are probably the easiest fish to breed in the aquarium.
When males are breeding a large, grey fleshy fatty tissue growth on the nape, as well as about 16 white breeding tubercles on the top of the head, thats were the name fathead comes from. Once he is ready to mate, he will claim a cave or overhang in the tank and clean the surface completely with his head. Other males that are ready to breed may challenge the male for his newly claimed home, but any fights are usually brief..
After the male has fought off any challengers, he will attempt to entice a female into the cave or overhang. An elaborate dance will begin between the two fish, and if the male impresses the female, he will lead her back to the cave or overhang and she will deposit her eggs. The female is then usually pushed out by the male, and he begins fiercely guarding the eggs. The male will watch over the eggs carefully, occasionally rubbing them with his head and nose which contains an anti-fungal solution. Other females may be enticed into his cave until the walls of the cave are completely filled with eggs. The male will guard the eggs until they hatch, and he will attack fish many times bigger then him to protect his egg hatchery.
After a little time, the eggs will begin to hatch, and free swimming fry will begin to appear in the tank. At this point, they should be fed with baby brine shrimp or mircowrms. When all of the eggs have hatched, the male will usually abandon his cave, and will have nothing to do with the fry. In most cases it�s safe to leave the fry in the same tank as adult Rosy Red Minnows, they rarely eat their young.
Rosy Reds Minnows should never be put into an aquarium containing other fish, until they have been quarantined for a minimum of four weeks in separate quarantine tank and treated for parasites and disease.
Rosy Red Minnows breed very quickly.

Search the Web for More information on Rosy Red Minnow at LookSeek.com Search