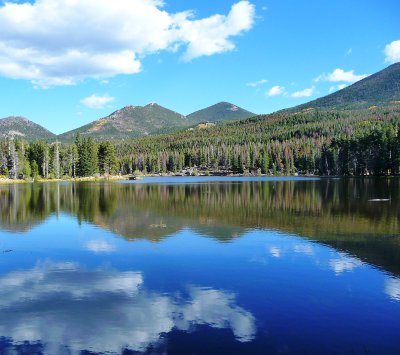 Rocky Mountain National Park is a national park situated in the north-central region of Colorado, US. This beautiful park is comprised of approximately 1076 km2 (265,828 acres) of land, including 578 km (359 miles) of trails, 720 km (about 450 miles) of streams and 150 lakes. It features majestic Mountain views, a variety of wild-life, mountain lakes, varied climates and environments and easy access to back-country campsites and trails. Furthermore, it contains seventy-two named peaks higher than 3700 meters (12000 feet), and over a quarter of the park sits above tree line.

Longs Peak is the highest point of this park, rising to 4346 meters (14259 feet) above sea level. On the northern region of this park, Mummy Range features a number of smaller peaks including Mont Chiquita, Mummy Mountain, Ypsilon Mountain, Hagues Peak, and Fairchild Mountain. Several tiny glaciers and permanent snowfields are present in the high mountain cirques including Taylor, Sprague, Andrews, Mills, Rowe, Moomaw and Tyndall Glaciers.

Rocky Mountain National Park is popular for having abundance of wildlife within its borders, and animal watching is a popular activity among the thousands of tourists who flock to this park yearly. In the higher alpine regions, you can find pikas and yellow-bellied marmots. Large mammals that inhabit this park include Bighorn sheep, Moose, mountain lions, Elk, mule deer, and black bears. More than 280 different bird species reside in or migrate to this park yearly. In fact, the bird’s large population is the reason why this park was designated as a Globally Important Bird Area by ABC—the American Bird Conservancy.

A large section of this national park is designated wilderness. Simply put, wilderness is undeveloped land allowed to flourish naturally without human intervention. Upon visiting this park, you will realize that the lower elevations are typically dominated by wetlands, hills of grass and dense forests. As you gain elevation, the ecosystem changes first to the sub-alpine region, with knotted and distorted fur & spruce trees. Further elevation introduces you to the harsh climate of the alpine tundra, with low, ground hugging plants, and a landscape barren of both trees and tall vegetation.

August and July are typically the warmest months in the park with temperatures reaching the 80s. Heavy winter snows can commence around mid-October. Springs are usually wet, alternating between rain and occasional light snow that can occur as late as July in the higher regions. The east side of this park is drier than the west side because the later receives more precipitation.

The first time that these mountains were referred to as Rocky Mountains was back in 1753 in the journal written by St. Pierre Legardeur. In his journal, Legardeur called the mountains Montaignes de Roche. It was not until 1915 that the rocky Mountain National Park became a national park. The then president, Woodrow Wilson, declared this park the 10th national park in the US. In September 2013, this park was heavily damaged by a significant five hundred-year reign event. As a result, the park was closed from September 12th to 19th, 2013, and all major roads leading to the park entrance from the east were temporarily closed for several days.