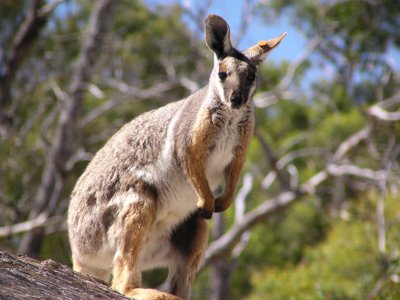 Facts about Rock Wallaby. "Scientific name for Rock Wallaby is Petrogale". Rock wallabies are medium sized, colorful and severely agile creatures that live in rocky, rugged and steep terrains. The reason behind the Rock Wallaby choosing such a habitat is to provide them daytime refuge. The males grow to become larger than the females.

Rock Wallaby are nocturnal and live in groups. They spend the daytime in caves, shelters of shrubs and come out in night for food. Most of their activity is recorded around three hours before and after sunrise.

Although the Rock Wallabies live in groups, the groups are forced to be small ones as they need to hide in the day time under the rocky structures. A herd of greater number might make the whole group visible to the enemy. The Rock Wallaby allocate areas to themselves and each colony roams and collects food from an area of 15 hectares that falls under their range.

Rock Wallabies don’t move more than 4.4 pounds (two km) from their own territory in night. The Rock Wallaby are highly territorial in nature. Male rock wallabies’ area overlaps with a number of female ones.

Rock Wallabies are three types of habitats that are mostly proffered by the rock wallabies. They are loose piles of boulders that make a narrow passage in between, cliffs & caves and rock stacks.

The main threat to the Rock Wallaby is loss of their habitat due to clearance of native vegetation, invasion and changed pattern of fire in the landscape. The Rock Wallaby are also killed by foxes and face a tough competition for food with livestock, goats and rabbits. This completion pushes them to put their steps outside of their natural ranges which brings death as reward.

Hunting rock wallabies for fur had an initial impact on their number, but the government’s anti-hunting regulation has brought a pause to their vulnerability.

Currently rock wallabies are considered to be in serious danger of extinction. Several surveys and restoring measures are being taken not to make the species completely disappear from the earth's surface

Search the Web for More information on Rock Wallaby at LookSeek.com Search