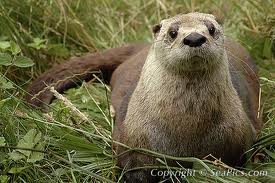 It belongs to the weasel family and it has an impressive adaptability on land and the in water. North American River Otter digs holes and burrows in areas close to rivers, lakes, or swamp edges. Inside, the burrow it has multiple tunnel openings which allow the River Otter to get in and get out of the water and back in at its convenience. The females usually gives birth in these tunnels.

There is distinct sexual dimorphism with the male River Otters averaging 5 percent more in body size compared to their female counterparts.

River Otters are among the most active semi aquatic mammals. Throughout the year, the river otters are active mostly at night. During spring, summer and part of the fall season, they come out to hunt and play around at night while in winter months the River Otter can be spotted during the day, because of seasonal food shortages and harsh environmental conditions it is common to see the river otters migrating from one area to another, they do not however do this on an annual basis but rather periodically.

The mother River Otter is the one responsible for raising the young ones. The pups grow their coats when they are about two months old, the exact time their mother introduces them to aquatic life.

Search the Web for More information on River Otter at LookSeek.com Search