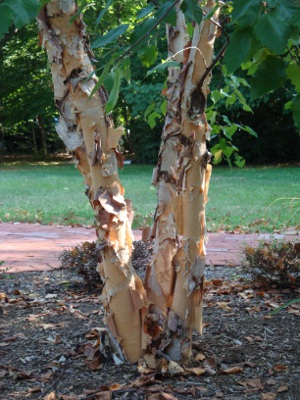 River Birch Tree was once spotted in the United States by Prince Maximilian of Austria. When he once spotted it, he was amazed by its graceful drooping limbs and attractive color. This is why river birch tree is used for landscaping purposes.

Also known as red birch, black birch or water birch this tree is native to Southeastern United States. The tree grows along rivers and lakeshores, as well as sandbars and islands in streams. It is among the most widely distributed and adapted tree in US. You will not get any other birch tree in the Southern parts of the States and it is adapted in hot climates.

River birch tree grows under full sun to full shade. The soil must be highly acidic to slightly alkaline. Whether loam, clay or sand, this tree will do well in all. It is resistant to bronze birch borer and verticillium. Pests and other conditions like beetle borers, leaf spots are not a major threat to this tree.

The river birch tree is a fast growing tree and it reaches around 50-90 feet in height. It is diamond shaped and has double toothed leaves which produce an erect canopy. When the tree is young, the bark peels and its normally silvery grayish. It later changes to pink, reddish brown or black after it has matured. The leaves turn yellow in color in the fall. The tree produces flowers in the spring and winter.

This tree is an ornamental tree and mostly used in parks, homes as well as street sides. Its wood is very durable and can be used to make various items like toys, artificial limbs among others. It acts as soil erosion control and places that have very high acidic soils, it helps in reclaiming them.

There is wildlife that depends on this tree too. Deer eat the twigs, ruby-throated hummingbirds drink its sap and the birds eat the seeds.