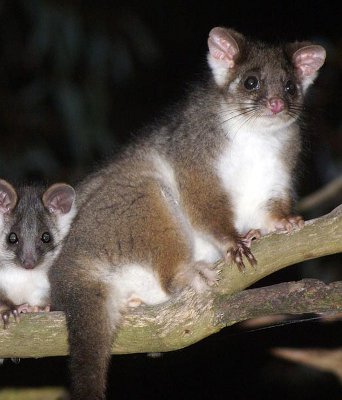 Facts about Common ringtail possum. "Scientific name for Common ringtail possum is Pseudocheirus peregrinus". If you happen to visit or live in Sydney, then, you may have come across this type of species. The Common ringtail possums have been able to adapt to the environment as they are often seen at night in the sub-urban gardens. They are usually big and are always compared to the size of a cat. The most popular Ringtail Possum is covered with a grey fur with patches of white colors around its belly and behind its eyes. In addition, it also has an orange to brownish tinges on its limbs and tail. It also has a very long white tipped tail that is prehensile in nature. The Ringtail Possum uses its tail for jumping and climbing between fences, power lines and branches of trees.

The Common ringtail possum also has its fingers elongated in between its second and third fingers in addition they have a syndactyl type of back feet. This elongation and the syndactyl nature of their feet enable the Common ringtail possum to hold firmly on tree branches. Most popular Common ringtail possum weighs around five fifty grams to one thousand one hundred grams. It is also known to be approximately 11 7/8 to 13 3/4 inches (30 to 35 cm) after it has fully grown to a mature adult. However, most of these species tails do not grow any longer on a much later date.

Most of the popular Common ringtail possum have been known to be nocturnal in addition to their well adaptation to the arboreal life. The Common ringtail possum species depend entirely on their prehensile tails as they occasionally descend to the ground. At night you may be able to hear their voices as they communicate using high pitched twittering calls that are soft.

The popularly known Ringtail possums are located in eucalypt woodlands, dense scrub, rainforest, suburban gardens and in tropical and temperate environments like those found in Queensland, Tasmania, and east coast of Australia, Victoria as well as some few parts of southwestern Australia.

The Common ringtail possum feeds on a wide variety of plants like fruits from shrubs, foliage, and lower canopy and flowers.

Search the Web for More information on Common Ringtail Possum at LookSeek.com Search