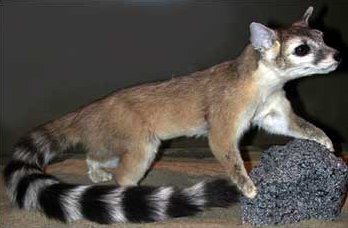 Facts about Ring-tailed Cat, "Scientific name for Ring-Tailed Cat is Bassariscus astutus". Ring-tailed Cat is a Bassariscus type of animal that comes from the raccoon family called Procyonidae. These mammals are not actually cats and they hail from the arid areas of North America. The Ring-Tailed Cat is also called by other names, such as the Ringtail cat, Marv cat, or Miner's cat. The Ring-tailed Cat are largely found in Central America, California, Northern South America, Colorado, eastern parts of Kansas, Oregon, Oklahoma, Arizona, southern Nevada, New Mexico, Utah, Texas, and throughout central and northern Mexico. Usually, they live in rock-strewn, desert as their home, where they nest in the tree hollows or deserted wooden structures. The Ring-Tailed Cat is the state animal of Arizona.

The Ring-Tailed Cat has a buff to dark brown color body with white color underparts and a showy black and white color striped tail that ranges in length from 14 inches (35.5 cm) to 16 inches (40.6 cm), with alternating bands of black and white color fur. The tail of the Ring-tailed Cat is longer than the remaining parts of its body. They have short legs, and straight, small, and semi-retractable claws, with big black-colored eyes, surrounded by a patch of light hair. The Ring-tailed Cat is smaller than a domestic cat and it is one among the smallest existing Procyonids. When fully grown, the Ring-Tailed Cat attains a body length, ranging from 12 inches (30.48 cm) to 17 inches (43 cm) measured up to the tip of its tail, with a body mass between 1.5 pounds (0.68 kg) to 3.3 pounds (1.49 kg). Occasionally, the Ring-tailed Cats are hunted for their pelts, but their fur is not valuable in particular.

The Ring-Tailed Cat is an outstanding climber that is capable of ascending perpendicular trees, walls, rock-strewn cliffs and cacti. They have the capacity to rotate their back feet 180 degrees, offering them a fine grip for sliding those same structures. The Ring-tailed Cat have outstanding eyesight and hearing, both obliging adaptations for a nocturnal mammal.

Usually, a Ring-Tailed Cat prefers to inhabit stony homes connected with water. These regions can comprise caves, riparian canyons, and mine shafts. The Ring-tailed Cat perform well in the wild and have no extraordinary conservation status.

The Ring-Tailed Cat is an omnivorous mammal that means they will feed on anything if the diet is of correct size. Mostly they feed on snakes, insects, fruit, and lizards, small creatures, such as wood rats, mice, squirrels, birds and their eggs.

Much similar to the common raccoon, the Ring-Tailed Cat is nocturnal and lonely. It is also fearful towards humans and seen much more uncommonly than raccoons. In spite of its shy nature and tiny body size, the Ring-tailed Cat is arguably the most vigorously carnivorous variety of Procyonid. Their main predators include foxes, raccoons, coyotes, bobcats, owls and hawks. The Ring-tailed Cats make a diversity of sounds, as well as chatters and clicks reminiscent of raccoons. A usual call is an extremely noisy, mournful bark. As adults, these small animals lead lonely lives, usually coming together to mate.

The mating season in Ring-Tailed Cats commences during the spring season. Usually they attain the sexual maturity after ten months of their birth. Generally, the gestation period is 45 to 50 days, during which the male cat will acquire food for the female cat. The average size of the litter will be 2 to 4 cubs. The cubs will first open their mouth and then their eyes following a month. When they attain the age of four months, they start hunting for themselves.

The average lifespan of the Ring-Tailed Cat ranges from 6 years to 9 years in the wild. They survive for a longer period in the captivity.

Search the Web for More information on Ring-tailed Cat at LookSeek.com Search