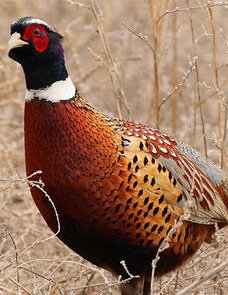 The Ring-Necked Pheasant or Common Pheasant ( Phasianus colchicus)
The Ring-necked Pheasant was introduced into North America from Asia and is established over much of the continent, especially in agricultural lands. It is a distinctive and colorful species and is a popular game bird.
Males are vibrantly colored with blue-green heads, red face wattles, and distinctive white neck rings. Females are a rather plain buff brown, but both sexes have long, pointed tails.
Each spring a male delineates and defends his territory and his harem from aggressive rivals. Such encounters can lead to vicious battles.

The males are polygynous as is typical for many Phasianidae, and are often accompanied by a harem of several females. In the spring, cocks attract hens and warn other cocks to stay out of their territory by crowning a hoarse, two syllable Erk-erk. In his courtship display the cock pheasant will strut, spread his tail, and fluff out his feathers. Nesting on the ground, in tall grass or weeds, a scrape in ground or vegetation, unlined or sparsely lined with vegetation, and occasionally a few breast feathers from female.
Incubation: Ringneck Pheasant eggs take 24-25 days at 99.5 in a forced air incubator or 101.5 in a still air, with a humidity of 60-65%. Stop turning on the 22nd day and raise the humidity to 80-85%

Search the Web for More information on Ring-Necked Pheasant at LookSeek.com Search