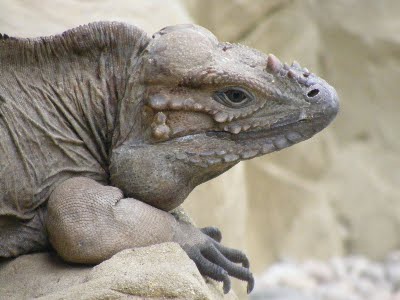 The Rhinoceros iguanas leathery skin is mostly grayish in color, but it may also be olive-green or even black in color due to the rough scales covering it. The Rhinoceros iguana crested body has spines running through its back from head to tail. Unlike most lizards, which weigh less than a pound (kilogram), a Rhinoceros iguana weighs an average of 13 pounds (6 kg). Its body length can measure up to 5 feet (1.2 meters).

The Rhinoceros iguana are commonly inhabiting dry areas with rocks, cactus, and areas with tall grasses such as the savannas. The rocks have a role in providing shelter to the iguanas. The Rhinoceros iguana is a native of Haiti and Dominican Republic. The species was initially found near coastlines but nowadays they have retreated away from it due to disturbances from humans.

The Rhinoceros iguana is an omnivore but it feeds more on plant material such as waste vegetable matter, leaves, fruits, and flowers. Invertebrates such as insects and other small animals are preyed on to supplement the nutrient requirements of the reptile.

The Rhinoceros iguana becomes sexually active and becomes mature enough after reaching a minimum age of five years. Both sexes will mate and approximately, after forty days, females will lay eggs. Depending on food availability, one female Rhinoceros iguana can lay five to twenty eggs. The eggs are then hidden in dugout burrows where they will hatch approximately after 160 days mainly during the month of august. The newly hatched Rhinoceros iguana measure about 7 inches (18 cm) in length, which will then live for about 20 years. It is believed that the first rainy season in April is a positive breeding factor for Rhinoceros iguana.

Predators and threats of Rhinoceros iguana

Most Rhinoceros iguana are threatened by environmental destruction and will tend to flee away. They are, however, important in the food chain as other animals such as, Feral dogs, pigs, mongoose and some carnivores for example cats predate them.

Search the Web for More information on Rhinoceros Iguana at LookSeek.com Search