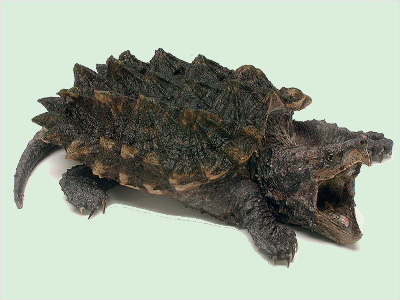 Facts about Reptiles. Between 225 and 65 million years ago, reptiles dominated the land. There were several reasons for their success. Unlike amphibians, they developed waterproof skins so that they would not lose moisture and dry up. The Reptiles also evolved efficient lungs for breathing. But perhaps the most important difference between the reptile and the amphibians was that the reptiles began producing tough hard shelled eggs that did not have to be laid in water.

About 65 million years ago, something happened that ended the rule of the reptiles. No one knows exactly what it was, but as a result, only four groups of reptiles survive today, along with birds and mammals, which are descendants of two other reptile groups.

The smallest of the modern reptile groups contains only one member, the Tuatara. It is the only survivor of a group that existed 200 million years ago. The Tuatara only survives in New Zealand where it is a protected reptile.

The tortoises and turtles, which belong to another reptile group, have also changed little over the last 200 million year. Their bodies are enclosed and protected by a hard shell made of bony plates. Tortoises are land animals, as were their ancestors of the group. But turtles’ have returned to the water and developed paddle shaped limbs for swimming. Tortoises and turtles lay their eggs on land, usually burying them in earth or sand. The eggs are then left to hatch on their own.

Crocodiles are another group of reptiles, which live in swamps in tropical countries. The group includes true crocodiles, alligators, caimans, and gavials. They have long snouts and their nostrils and eyes are raised to allow them to float just beneath the surface of the water. Crocodiles lay their eggs in mounds and a fiercely protected by the female.

The lizards and snakes are the largest group of reptiles with species numbering well over 5000. There are many types of lizard, ranging from the tiny geckos, which can climb any surface, to the nine foot long Komodo Dragon of Indonesia. Most lizards walk on four legs, but some can run on their hind legs and a few burrowing types have no legs at all.

Snakes are probably descended from legless lizards. There are two types of snake. A constrictor, such as a python, who throw coils around its prey and suffocates it. A biting snake strikes with its fangs. All snakes swallow their prey whole. The upper and lower halves of the jaw move apart to allow the prey to pass into the snakes’ body.

Most lizards and snakes lay eggs and some even protect them until they are hatched. However, a few keep their eggs inside them until they hatch, and give birth to active young.

Search the Web for More information on Reptiles at LookSeek.com Search