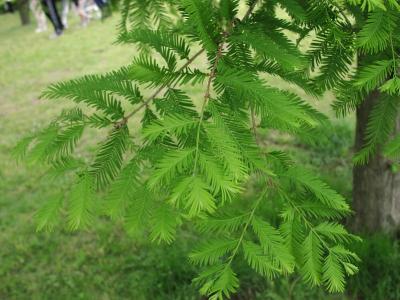 Facts about Redwood Dawn Tree, Redwood Dawn Tree (Metasquoia glyptostroboides) The Redwood Dawn, also called the dawn redwood and Metasequoia, has. It is part of the Cupressaceae subfamily and the only living member of its genus. At least twenty related fossilized species have been identified. The Redwood Dawn Tree is one of three living species of redwoods. It is the shortest of the three. It only grows to a maximum height of two hundred feet (60.96 meters).

Redwood Dawn Tree produces round cones half an inch to an inch (1.2 to 2.5 cm) across.

This species traces its lineage back to the time of the dinosaurs. Archeological digs revealed that large swaths of Metasequoia trees stretched from what is now Canada to Asia around the Arctic Circle.
When the Redwood Dawn Tree is young, it has a pyramidal shape. As it matures, the crown rounds out. It is regularly planted to become a shade tree. Redwood Dawn Trees bark and leaves are similar to the California redwood.
The Redwood Dawn Tree has feathery leaves that turn brown with red or orange tints in the fall. The metasequoia shifted from coniferous to deciduous at some point in its history, making it the only deciduous sequoia species. The leaves are about half an inch to one inch long (1.2 to 2.5 cm). The species is considered a living fossil, because the fossilized remains of the species from millions of years ago look incredibly similar to living specimens today. The Redwood Dawn Tree was first identified from Chinese fossils in 1941, but living members of the species were discovered several years around.
Redwood Dawn Tree leaves are made up of many colored pigments, green chlorophyll hides the colors during the growing season of spring and summer. As days get Shorter and cooler temperatures come in the fall, it cause the chlorophyll to break down and than the other color pigments can be seen.
Redwood Dawn Tree growth is referred to as Meristem (The undifferentiated embryonic plant tissue from which new cells are created, as that at the tip of a root or stem). This tissue can be found at the tips of shoots and leaves. Inside the stem growth in thickness occurs at the vascular cambium.
Redwood Dawn Trees make their own food from sunlight, carbon dioxide, water, and nutrients from the soil.

Redwood Dawn Tree grows fast. It reaches up to a hundred feet tall and has a twenty five foot (7.62 meters) spread. It grows in zones five through eight. It thrives in areas with deep, fertile, well drained soil. However, it can grow in many soils.

The Redwood Dawn Tree is easily transplanted, but should be planted early in the fall so that the roots are established before the first winter freeze. Don’t plant it in low lying areas that can create frost pockets.

Search the Web for More information on Redwood Dawn Tree at LookSeek.com Search