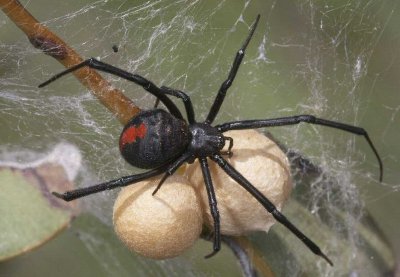 The Redback Spiders are mostly found in Australia but they can survive anywhere else in the world as long as there is adequate food and warmth necessary for breeding purposes. The Redback Spider favor urban areas where there is human contact.

Redback spiders build their webs in dry areas such as rocks, shrubs, logs, sheds, toilets or junk-piles. The Redback Spiders is not commonly seen during the cold winter season.

A Redback Spiders stomach can only take liquids, so a spider needs to liquefy their food before they eat. They bite on their prey and empty its stomach liquids into the pray which turns it into a soup for them to drink.

Normally, male Redback spiders do not make webs. They can however be found around female spiders’ webs especially during the mating season. The male Redback Spider usually somersault revealing their abdominal sides to their female counterparts during this season. The whole wooing period could sometimes prove fatal especially if the females mistake the male spiders for prey.

If the male Redback Spider is successful in wooing the female; she squirts digestive juices onto the abdomen of the male. The first palp is usually inserted and if the male is strong enough he manages to withdraw and insert the second palp. However, most male Redback Spider tend to die during this process.

Spiders belong to a group of animals called "arachnids", mites and Scorpions and a tick is also in the arachnid family. An Arachnids is a creature with eight legs, two body parts, no antennae or wings and are not able to chew on food. Redback Spiders are not insects because insects have three main body parts and six legs and most insects have wings.

Redback Spiders have oversize brains.
In the Redback Spider the oxygen is bound to "hemocyanin" a copper-based protein that turns their blood blue, a molecule that contains copper rather than iron. Iron-based hemoglobin in red blood cells turns the blood red

Redback Spiders have two body parts, the front part of the body is called the Cephalothorax-(the thorax and fused head of spiders). Also on this part of the body is the spider’s gland that makes the poison and the stomach, fangs, mouth, legs, eyes and brain. Redback Spiders also have these tiny little leg-type things called (pedipalps) that are next to the fangs. They are used to hold food while the spider bites it. The next part of the Redback Spider body is the abdomen and the abdomens back end is where there is the spinnerets and where the silk producing glands are located.

The muscles in a Redback Spiders legs pull them inward, but the spider can't extend its legs outward. It will pump a watery liquid into its legs that pushes them out. A Redback Spider’s legs and body are covered with lots of hair and these hairs are water-repellent, which trap a thin layer of air around the body so the Redback Spiders body doesn't get wet. It allows them to float, this is how some spiders can survive under water for hours. A Redback Spider feels its prey with chemo sensitive hairs on its legs and than feels if the prey is edible. The leg hair picks up smells and vibrations from the air. There are at minimum, two small claws that are at the end of the legs. Each spiders leg has six joints, giving the Redback Spider 48 leg joints. The Redback Spider’s body has oil on it, so the spider doesn't stick to it’s own web.

Redback Spiders do not have a skeletons. They have a hard outer shell called an exoskeleton-(a rigid external covering for the body in some invertebrate animals). The exoskeleton is hard, so it can’t grow with the spider. The young Redback Spiders need to shed their exoskeleton. The spider has to climb out of the old shell through the cephalothorax. Once out, they must spread themselves out before the new exoskeleton will harden. Know they have some room to grow. They stop growing once they fill this shell. Female Redback Spiders are usually bigger than males.

Search the Web for More information on Redback Spider at LookSeek.com Search