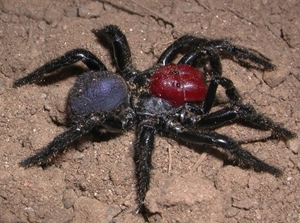 The term mouse spider comes from the mistaken belief that mouse spiders had very deep burrows like mice, but the mouse spider's burrows are mostly just deep enough to protect from a predator and wide enough for the spider to turn around.

Red-headed Mouse Spiders do not have a skeletons. They have a hard outer shell called an exoskeleton-(a rigid external covering for the body in some invertebrate animals). The exoskeleton is hard, so it can’t grow with the spider. The young Red-headed Mouse Spiders need to shed their exoskeleton. The spider has to climb out of the old shell through the cephalothorax. Once out, they must spread themselves out before the new exoskeleton will harden. Know they have some room to grow. They stop growing once they fill this shell. Female spiders are usually bigger than males.

Search the Web for More information on Red-headed Mouse Spider at LookSeek.com Search