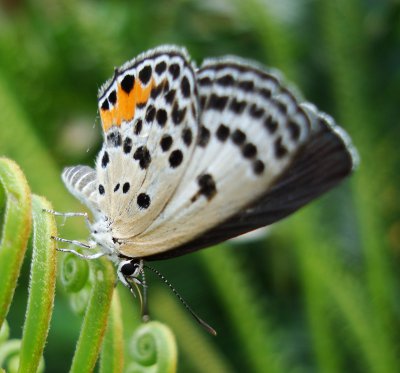 The female Red Pierrot butterflies lay eggs on the undersides of leaves. Due to the succulent nature of the Kalanchoe leaves at all times, the females lay eggs irrespective of the stage of growth of the leaves.

The caterpillars of these butterflies have a range of colors from pale yellow to a dark white with large black spiracles. The Red Pierrot Butterfly bodies are covered with tiny white bristle-like hair. Once it is hatched, the caterpillar bores into the leaf and spends its entire life in the layers of the leaf. This is one of the ways it defends itself from predators. In the leaf, the Red Pierrot caterpillar consumes the whole leaf in a spiral manner leaving black trails filled with droppings in its way. Unless when changing leaves or pupating, the caterpillar cannot be seen on any other time.

During pupation, the caterpillar comes to the surface of the leaf to form a silk pad and a body band in order to moult into a pupa. The pupa is yellow with long light hairs and black spots covering its body.

An adult Red Pierrot Butterfly will come out from the "chrysalis" than it waits a few hours for its wings to dry and fill with blood, before it takes its first flight.

The larva feeds on the host plants. The larva’s host plants are Kalanchoe laciniata and K. pinnata of the Crassulaceae family.

The adult Red Pierrot Butterfly like taking nectar from the herbal flowers of amaranthceae and the acanthaceae family. Its favorite flowers include those from the Alternathera varieties. The Red Pierrot Butterfly often sits with its wings closed to display the bright markings on the underside of its wings. It is a protected species due to its fearlessness and weak flight. Adults collect phenolic substances by scrapping lichens. Red Pierrot Butterfly are insects. A Red Pierrot Butterfly is a herbivore; Meaning that as a caterpillar its first food is its own eggshell and than it will eat the leaves of the plant on which it is hatched. When it becomes a Red Pierrot Butterfly, it will feed mostly on nectar from flowers, rotting fruit and water with a "proboscis" - a long narrow tube in their mouth that looks like a straw.

Search the Web for More information on Red Pierrot Butterfly at LookSeek.com Search