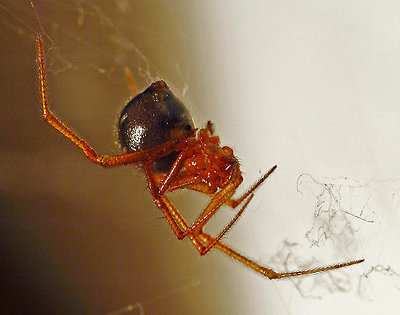 Facts about Red House Spiders, "Scientific name for Red House Spider is Nesticodes rufipes". The Red House spider is so named because it is a big red spider that will happily make its web in your home. A native Australian, the red house spider or red-legged house spider, formally named Nesticodes rufipes, is reddish brown or orange over its entire body, including its legs. It has a globular abdomen. The Red House spider is part of the Theridiidae family. The larger Theridiidae family of spiders is worldwide in tropical and semi-tropical areas.

Red House Spiders do not have a skeletons. They have a hard outer shell called an exoskeleton-(a rigid external covering for the body in some invertebrate animals). The exoskeleton is hard, so it can’t grow with the spider. The young Red House Spiders need to shed their exoskeleton. The Red House Spider has to climb out of the old shell through the cephalothorax. Once out, they must spread themselves out before the new exoskeleton will harden. Know they have some room to grow. They stop growing once they fill this shell. Females are usually bigger than males.

A Red House spider isn’t dangerous, like the redback spider. The redback spider, Latin name Latrodectus hasselti, has a red back or body but black legs. But the confusion is common since they are the same size, have a similarly colored body and will both build a nest in the corner of a closet or between outdoor pots. The red house spider’s bite is painful but not deadly.
The red house spider won’t live in cold areas, but it likes cooler parts of your home. This is why it is found in cupboards, closets and shaded areas. It primarily eats ants but will eat any insect that lands in its web.
Red house spiders breed throughout the year. The round egg sack will be kept near the web but not on it.
Females have a red band on their bodies and an hour glass shape on the abdomen reminiscent of the black widow spider. The red house spider is a fifth to a third of an inch in length. Females are about twice the size of the males.
Red house spiders do not weave large, neat webs. Their webs are tangled messes, affixed to the walls and floor at multiple points. If you disturb the nest, the spider will drop down via a drop line to the floor. These spiders are not aggressive, but they will bite if your foot tangles with their nest.

Red House Spiders belong to a group of animals called "arachnids", mites and Scorpions and a tick is also in the arachnid family. An Arachnids is a creature with eight legs, two body parts, no antennae or wings and are not able to chew on food. Red House Spiders are not insects because insects have three main body parts and six legs and most insects have wings.

Red House Spiders have oversize brains.
In a Red House Spider the oxygen is bound to "hemocyanin" a copper-based protein that turns their blood blue, a molecule that contains copper rather than iron. Iron-based hemoglobin in red blood cells turns the blood red

A Red House Spiders stomach can only take liquids, so a spider needs to liquefy their food before they eat. The Red House Spider bite on their prey and empty its stomach liquids into the pray which turns it into a soup for them to drink.

A male Red House Spider has two appendages called "pedipalps" a sensory organ, instead of a penis, which is filled with sperm and insert by the male into the female spider’s reproductive opening.

Search the Web for More information on Red House Spider at LookSeek.com Search