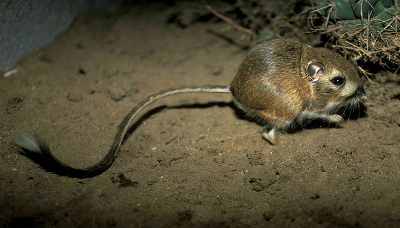 Facts about Rat kangaroos. Scientific name for Rat kangaroo is Dipodomys deserti". There are nine species of marsupials found in tropical rain forests of Australia and Tasmania. Rat kangaroo is one of them. This is the smallest kangaroo species.

Some of the taxonomists classify Rat kangaroo as a separate sub-family because it is the only kind to have a naked tail and it retains its first digit of the hind foot also, it is distinguished from its other family members by its five fingers in the hind foot. The tail is rather covered with small scales. The Rat kangaroo head is grey-brown color and body is covered with rich brown fur.

Rat kangaroo usually give birth to two young ones at time instead of the quite normal single births. They move very slowly in a bunny-hop manner.

Restricted to the dampest areas of the tropical rain forests of Australia, the Rat kangaroo are mostly found roaming around the creeks and rivers. This shows their addiction to water abundant areas. Their unique first digits help them climb the trees in night for resting or they dwell the ground too. The Rat kangaroo enjoy happy naps in midday and night in nests made up of dry leaves.

Apart from the casual new born leaves they mainly live upon the fruits available in the rain forests. King Palm seems to be their first choice while looking for a vegetarian food. They feed on small invertebrates otherwise.

Rat kangaroo are mostly seen to be love-to-be-lonely animals. A maximum aggregation of three or four has been recorded so far. They love to live of their own.

The Rat kangaroo can been seen hunting for their food in early mornings and late afternoons.

Search the Web for More information on Rat-Kangaroo at LookSeek.com Search